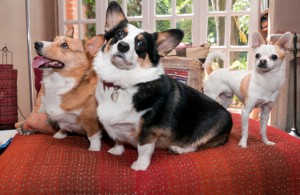 #5 Radar Ears: No, not in the way they hear things (although dogs certainly can pick up higher frequencies than us humans). Dogs are able to move and pivot their ears like little radar dishes, which is quite useful. To accomplish this, dogs are equipped with twice as many muscles in their ears than the average human. Oh, and let’s not forget dog ears are much prettier, and softer.

#4 Perspiring Pets Dogs don’t sweat the way we do. In fact, their cooling system is built-in. All dogs sweat through the pads on their paws (so watch out for little wet footprints on hot summer days). They also dispense heat (cool down) by panting. So don’t worry if your dog is panting on a hot day, he’s just turning on his internal air-conditioner. But please be vigilant that your dog doesn’t suffer from heat stroke.

#3 Beware Of Dog: If you think this sign is a modern invention, you haven’t done enough research (but that’s why InfoNg is here)! Mosaics meaning “Beware Of Dog” have been found on doorsteps throughout cities in ancient Rome. Yes, it appears as if the Romans invented the aqueduct, fashionable sandals, and the cheesy, not-so-subtle signs found on nearly every yard and fence in America.

#2 Better Than a Pair of Long Johns: If you were running about ancient China during the cold months, you might be a bit shocked to see people with dogs up their sleeves. This was not some kind of weird fashion statement. People used to keep warm by carrying toy dog breeds up their sleeves. Perhaps this is why Paris Hilton likes to carry her toy dogs in her handbag?

#1 (Tax) Man’s Best Friend Being a 19th-century tax collector was down-right dangerous, particularly in Germany. This was why fellow tax man, Louis Dobermann, created a dog breed that was capable of protecting him as he went about conducting his business — none other than the Doberman Pinscher. One suspects Louis was not a popular man …

So there you have it. Five fun and interesting facts about dogs.