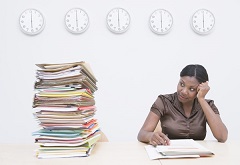 When you’re in a hurry-hurry state, you take the promotion you’re offered…and may end up living somewhere you never even wanted to live, or working in a field you actively hate.

I’m not going to lie: There is something addictive about the fast track. Maybe it’s the adrenaline—working under tight deadlines, managing crises, knowing there’s millions of dollars at stake. Maybe it’s all the caffeine—at one point I knocked back at least four cups of coffee a day. But somehow, as I drank coffee and worked as fast and as hard as I could every day, my hands shaking from the toxic, dizzying, addictive mix of caffeine and adrenaline and anxiety, a decade of my life went by.

Here’s the thing though, sure the fast track has its perks—professional advancement, financial increases, and the thrill of it all—but if you’re not careful, you too can lose a decade or more of your life too.

The third company I worked for laid me off as part of a major downsizing. I was devastated—didn’t they care about all the sacrifices I’d made for them? The late nights? The skipped lunch breaks? The coming in early and missing family events? No, apparently, they didn’t. It was all for nothing.

I should’ve taken that to heart, but I didn’t. I compulsively searched for a new fast-paced job and threw myself immediately into it with the same single-minded focus.

I turned twenty-nine. The grim realization that I was about to turn thirty struck. And somehow the daunting nature of a new decade—one that began with a three—was the wake-up call I needed. I realized my twenties were about to be behind me, and they had passed in an adrenaline- and anxiety-fueled blur. If I didn’t make a change, I’d be facing forty and just as stuck. So I enrolled in yoga-teacher training and spent the next fifteen months attending workshops on nights and weekends. Then I quit my job and started teaching. It was as simple and as terrifying as that.

I’m still not all yogi—I don’t wear hemp, douse myself in patchouli, or insist on being addressed as Shakti Moonshine—but I have stopped drinking coffee, my battle with chronic anxiety is about thousand times better, and I’m finally pursuing work that I’m passionate about.

Here are my top five reasons to say farewell to the fast track:

1. When you are on the fast track, each day passes in a blur of busy activity. The problem is that 365 days go by and you don’t even realize a whole year has passed. Then it’s five years…etc.

2. When you’re going fast, you can’t go in multiple directions at once. So you set your laser sights on your job—your next promotion, landing an office…with a door, then a bigger office, then a V.P. title—and you don’t even realize that the casualties of your single-minded focus are things like investing in a relationship, or keeping up your friendships, or flying home for your sister’s birthday.

3. When you’re going fast, it’s pretty much impossible to make mindful choices about anything. For me, the biggest casualties of that were what and how I was eating and who I spent my (limited) time with outside work. Bottom line: I ate a crappy diet and I ate too much crap from the guys I dated. But I didn’t take time to do anything about it.

5. This is your life. Your own magnificent, brave, adventurous life. To fill with whatever and whoever you choose. You will always be able to find excuses for why you can’t make a change…and those reasons and fears are valid and real. But the question you need to ask yourself is, If this is my one magnificent life, what do I want to do with it? If I died tomorrow, would I die knowing deep in my bones that I had done everything I wanted to do—or was well on my way to doing it? Would I feel that I had lived my life fully and with purpose? Ironically, it sometimes takes thinking about death to help us live more fully.