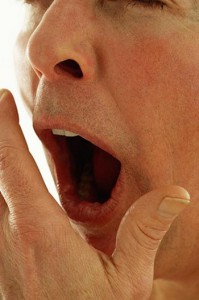 Incredibly, one in four Americans over age 20 has prediabetes — and most don’t even know it. Being prediabetic means that your blood glucose levels are higher than normal but short of being classified as diabetic levels. Studies show that most people with prediabetes go on to develop type 2 diabetes within 10 years, unless they lose weight and make dietary and exercise changes.

Because prediabetes develops gradually over years, it’s often said that there are no obvious symptoms. But it’s possible to notice certain warning signs of growing insulin resistance, the inability to process the energy in food properly that’s a key aspect of prediabetes, says Beth Reardon, director of nutrition for Duke Integrative Medicine at Duke University.

Paying close attention to such warning signs gives you plenty of time to make changes before the situation progresses to type 2 diabetes, she says.

“These symptoms usually occur in tandem with one another; together they create a bigger picture that says insulin resistance is going on,” Reardon says. “Some signs can be measured, some we feel, some we can just see.”

If you’re experiencing the following signs, you should ask your doctor about an insulin response test to measure your insulin and blood sugar levels. If the tests confirm that your body is starting to have trouble managing its glucose, it may be incentive for you to commit to the diet and exercise changes that can help move you away from the path toward diabetes.

Ready to nap right after a big meal? This is a normal response to an influx of carbs (think of that post-Thanksgiving dinner feeling). But if it happens often, your body may be sending a message that your diet is too diabetes-friendly.

After eating, all carbohydrates — whether in a doughnut or a carrot — are broken down into the bloodstream as glucose (blood sugar), the body’s main energy source. When the blood containing the glucose hits the pancreas, this organ gets the message to release insulin, a hormone it produces to help the cells throughout the body use glucose. Cells have insulin receptors that allow glucose to enter and either be stored as future energy or used right away.

It’s a great system. But a diet that’s high in simple carbs like sugar, white flour, and sweet beverages — especially when consumed in large quantities at one sitting — overwhelms it. According to Reardon, the cells’ insulin receptors eventually stop receiving the insulin, which means they can’t take in the glucose. The glucose builds up in the blood while the needy cells don’t get any. The pancreas, meanwhile, notes the glucose level is still high in the blood that flows through it, and it pumps out still more insulin in response. Net result: You feel sleepy and may find it hard to think, because your brain and body are depleted until the system rights itself.

“Over time, this cycle can cause someone to become chronically insulin resistant. The body simply can’t keep up with the demands that all those simple sugars and fats are placing on it,” Reardon says.

What helps: Slow your carb load. Choose more complex carbohydrates, such as whole grains (barley, oats, quinoa, spelt, brown rice), vegetables, and whole fruits (not juices) that the body has to work harder to digest. This means blood sugar stays stable longer. Move around right after eating — take a 15-minute walk; even washing the dishes helps — rather than plopping in front of the TV. The activity will help your body begin to process the big glucose intake faster and more efficiently. In fact, a Mayo Clinic study presented at the 2011 American Diabetes Association annual meeting reported blood sugar levels rose only half as much after eating in a group that was moderately active after a meal, compared to a control group that ate, then rested.

Among the most craved foods: chocolate, chips, and French fries. They’re loaded with sugar, salt, and fat — three substances that taste so good, they light up the reward system of the brain, which begs for more, more, more.

But what happens next in the body can be dangerous, says nutritionist Beth Reardon. Simple carbs such as sugars and white flour break down very quickly, providing a fast hit of energy. Soon, however — because the insulin-resistant cells essentially ignore this entry of glucose into the blood — the pancreas overcompensates, releasing more and more insulin to handle the glucose. What follows is a dramatic drop in blood sugar as the extra insulin quickly shuttles the glucose to the cells — and energy levels plummet. The body is caught in a wave of fatigue. So, naturally, it craves another quick hit of energy to bring blood sugar back up. The brain becomes obsessed with this mission. And before you know it, you’re reaching for a pick-me-up guzzle of soda, another handful of pretzels, a second cookie (or three).

People get sucked into a vicious cycle before they realize it, getting hooked on problematic foods they think they’re craving — while gaining weight.

What helps: Kick your food cravings. It’s challenging, but one starting place is to avoid triggers that you associate with these foods. Just seeing a fast-food sign or the cookie package in your cupboard can be enough to set off the pleasure system in the brain that fixates on having the craved food.

Instead of quick-hit snacks like candy bars or chips, substitute slower-to-digest choices, like a handful of nuts, a banana, or raw carrots dipped into a tablespoon of peanut butter, which will keep you feeling sated longer. Be persistent: It can take as many as a dozen “successes” in resisting an old craving before your new habit is established.

Most prediabetics carry excess weight, says Duke University’s Beth Reardon. That fact alone is a major risk factor for diabetes. But especially worrisome is when you try to cut back on calories and still can’t see the scale budge. Stubborn weight loss despite best efforts can be the result of mixed messages that our cells are receiving, Reardon says. “The cells are starving because the fuel they need (in the form of glucose) is not being absorbed at the insulin receptor site on the cell. In the face of a perceived fuel shortage, the body will hold tightly onto existing stores of energy — fat,” she says. What little is absorbed also goes straight into storage — as more fat.

What helps: Incremental change. Don’t think, “OMG, I have to lose 50 pounds; I can never do that.” Instead, think small. Losing just 5 to 7 percent of body weight prevents or delays diabetes by 60 percent, according to the Diabetes Prevention Program (DPP), a major multicenter research study. People over age 60 see even greater benefits, according to the DPP. Five percent of body weight translates to just 10 pounds for a 200-pound person. A combination of lifestyle changes (especially changes in diet) and medication is often needed to address weight loss in these circumstances.

Weight gain is weight gain, and all of it risks moving you down the path toward diabetes. But added pounds in one particular area — the midsection — are especially associated with insulin resistance and prediabetes.

Weight gain around the waist and abdomen (visceral fat) is considered more dangerous than extra padding in the thighs and rear. So-called “belly fat” is linked to a higher rate of high blood pressure, heart disease, stroke, and dangerous cholesterol levels — all risk factors for diabetes. Having an apple-shaped middle has also been linked to Alzheimer’s disease.

What helps: Diet, weight loss — and exercise. The third leg of a diabetes-thwarting approach is moving. It’s not true that sit-ups and other abdominal exercises will target belly fat. (Though they do build muscles.) Exercise plays a critical role because when you build muscle, you increase the number of enzymes that are able to metabolize glucose as a fuel source for those cells, nutrition expert Beth Reardon says. Aim for 30 to 60 minutes of moderate exercise (like a brisk walk) most days of the week.

High blood pressure is linked to many different conditions. But prediabetes may be the cause when it appears in tandem with excess weight gain (especially around the middle), fatigue, and other negative numbers on a medical workup (abnormal cholesterol levels and high triglycerides). Many people with high blood pressure worry about their heart without recognizing that the presence of hypertension — along with these other signs — is a neon red sign for prediabetes.

The numbers to beware: blood pressure equal to or higher than 130/85, an HDL “good” cholesterol level below 40 mg/Dl for men and below 50 mg/Dl for women, and triglycerides of 150 mg/Dl.

Blood pressure elevates in part because of inflammation, a damaging cascade of events in the body that high insulin levels contribute to. “Blood becomes stickier and more viscous, and blood clotting factors increase, making it more difficult for the body to move the blood around,” Duke University’s Beth Reardon says. “Insulin also has an effect on the pliability of blood vessels, making them less elastic and therefore less able to respond to changes in pressure. This, in combination with blood that doesn’t flow as easily, results in elevated blood pressure.”