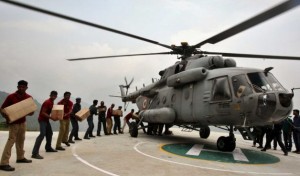 A helicopter helping victims of devastating floods in northern India has crashed near a pilgrimage site, killing all eight people on board, including five crew members, as fresh rains hampered the bid to rescue thousands still stranded.

The helicopter, which crashed on Tuesday afternoon, was on a medical mission near the pilgrimage site of Gaurikund, air force officials told AFP news agency. 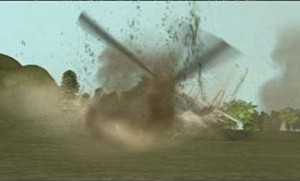 Reasons for the crash were being investigated, according to Gerard Galway, a spokesman for the air force in Uttarakhand.

The military has been leading efforts to evacuate about 6,000 pilgrims and tourists still stranded throughout the state since the floods hit on June 15. Uttarakhand boasts of several famous Hindu shrines and attracts thousands of pilgrims every year.

About 60 air force helicopters are taking part in the rescue operation in the Himalayan state of Uttarakhand where more than 1,000 people have been killed by floods and landslides since the beginning of last week.

Military helicopters have been grounded because of bad weather, suspending the evacuation by air of those still stranded, private television channel CNN-IBN earlier reported.

More rains are expected over the next 24 hours, the channel quoted weather officials as saying.

“The place where we were supposed to go is under the impact of the heavy rain and it is not possible to go there because of zero visibility,” Captain Ashfaq Gauri, a pilot, told the channel.

“The most important thing is visibility while flying in the mountain regions. If there is no visibility, it is not possible to fly. Only one helicopter did the rescue operation.”

Raging rivers have since swept away houses, buildings and even entire villages in the state, which was packed with travellers in what is a peak tourist season.

More than 1,000 bridges have been damaged along with roads, cutting off villages and towns.

Armed forces have evacuated more than 10,000 people to safety so far. But many of those stills stranded at higher altitudes of the hilly state are feared to be without food and water.