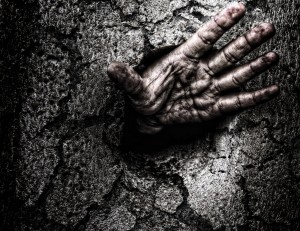 The remains of an 82-year-old retired Inspector of Police, Elder Samuel Ekhoruyimen, who was allegedly abducted by some youths of Ewudu village in Ovia North- East Local Government Area of Edo State have been discovered in an ‘evil forest’ near the village.

However, his remains suggest that he was buried alive in a grave dug before his abduction.

Pa Ekhoruyimwen who was the village head (Odionwere) of Oghobaghase near Ewudu community was said to have been invited to preside over the settlement of a dispute in his domain when he was allegedly waylaid and abducted by some youths of Ewudu village.

Following his sudden disappearance on May 10, 2013, his children living in Benin informed the Police who declared him missing after 24 hours of futile efforts by the family to ascertain his whereabouts, according to Vanguard.

The AIG who spoke through the Deputy Police Commissioner in charge of Administration, Mr. Dave Akinremi, revealed that the confessional statement of the prime suspect led to the arrest of seven others, including the Chief Priest of the Ovia deity in Ewudu community, Pa Stephen Oviawe, 78.

He added that two village heads and two youths were also arrested in connection with the gruesome murder.

Meanwhile, the police boss said efforts to recover the corpse of the former Police Inspector have been intensified, saying other suspects now at large went to remove the remains from the grave before policemen were led there by one of the suspects.

The prime suspect, Osamudiamwen Uwaila, speaking with newsmen at the Adesuwa Police Station, yesterday, disclosed that he connived with others now at large, captured the victim on the way to his village and took him to an already dug grave in the evil forest of Ewudu community.

He added that they plotted to kill the victim because of his alleged role in a land dispute between Ewudu an d Orogun communities some years ago.

Vanguard learnt that after the arrest of some of the suspects who took the police to where the retired police officer was buried, it was discovered that the body had been exhumed and reburied in a yet to be identified grave in the Ovia forest.

It was learnt that the deceased may have been killed for ritual purpose. However, one of the suspects (name withheld) while confessing to the crime to the police, disclosed that they decided to re-bury the victim’s corpse because they found out that the body was buried close to the road, therefore they had to exhume to rebury so as to ensure that the body was not found by the police. [Vanguard]