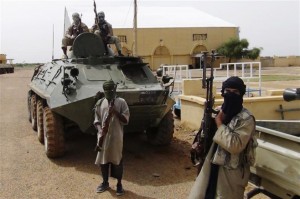 A top leader in al-Qaeda’s north Africa branch has been killed in fighting with France, Al-Qaeda in the Islamic Maghreb (AQIM) has said, according to a statement carried by the private Mauritanian news agency ANI.

The statement released by AQIM on Sunday said, Abdelhamid Abou Zeid, considered a top commander within the group, was killed in the ongoing fighting in Mali.

The statement did not provide details of the date of Zeid’s death, though it comes three months after France first announced he had been killed.

The AQIM said the Algerian-born Abou Zeid, died “on the battlefield defending Umma (the Muslim community) and sharia law.”

Paris had announced in March that Abou Zeid was killed in fighting with its forces after France led an offensive to rout al-Qaeda linked groups from northern Mali.

Both France and Chad, whose troops were also involved in the offensive, said the 46-year-old fighter was killed at the end of February.

“It is the first time that an AQIM statement has officially referred to the death of Abou Zeid,” said ANI director Mohamed Mahmoud Ould Abou Al-Maali, a specialist on the armed group.

Born in Debdeb in Algeria, close to the border with Libya, Abou Zeid was a young activist in the FIS Islamist movement that won the country’s first democratic elections in 1991 but was denied power.

He then disappeared underground for most of the 1990s, only to re-emerge in 2003 as second in command of the GSPC group which kidnapped dozens of foreigners in southern Algeria, and that would later, along with several other organisations, evolve into AQIM.