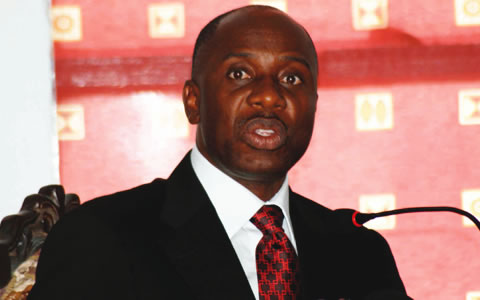 The no-love lost relationship between the Commissioner of Police in Rivers State, Joseph Mbu and Governor Chibuike Rotimi Amaechi on Thursday took a further nose-dive as the CP described Amaechi as a power-hungry dictator.

Speaking at a press conference in Port Harcourt, the Rivers state capital on the heels of a claim by the Rivers State government that Mr. Mbu is a security risk due to his penchant for divulging sensitive security information to some unnamed persons, the Police chief said Mr. Amaechi despised him and had been playing politics with his name because he refused to be subservient to him.

He said, “Sometimes, silence is golden but sometimes it is misconstrued. I have respect for Governor Amaechi but his attacks on me are going beyond bounds.

“Our governor is very tyrannical, he is a dictator. He wants everybody to say ‘yes sir’ to him and I said I will not say so. I am a professional.

“The governor should please stop playing politics with my name. I will tell the whole world why the governor is against me in the next interview. I will also tell you the crime rate before I came to Rivers and what the situation is now.”

Mr. Mbu further insinuated that the governor was power-hungry and had tried unsuccessfully to usurp his role as chairman of internal security meetings in the state and made reference to a letter from the office of the National Security Adviser (NSA) which directed that such meetings should be chaired by the commissioner of police.

“One issue I have had with the governor is who chairs internal security meetings in the state.

“He, (governor) said we should rotate it but I said no, there is a letter from the NSA on this.

“It is the commissioner of police that does. I told him if my predecessors did not do what was right I won’t follow them.

“The commissioner of police is to chair the forum and assume responsibility to brief the governor.

“I told him the Inspector-General of police has so many sources of information. I told the governor that my loyalty to the governor is total,” he said.

On the allegation that he had been revealing security information, Mr. Mbu said that no formal security meeting had taken place since his posting to the state, adding that he had not received any letter to that effect.

But reacting to the police commissioner’s claims, Rivers Commissioner for Information and Communications, Ibim Semenitari, described Mr. Mbu’s comments on the governor as “most unfortunate”.

“Mbu’s comments are most unfortunate, but we will prefer to address the matters raised administratively,” she said.