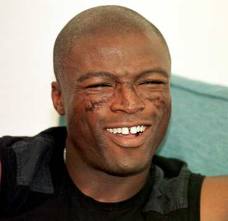 British singer Seal apologized Wednesday for a series of stinging tweets in which he said he “can’t wait to go home”, switching instead to profess his love for Australia.

Seal launched an attack on what he called Australia’s “trash media” after his fellow judge on talent contest “The Voice Australia” Joel Madden was kicked out of his Sydney hotel over drugs.

The Daily Telegraph tabloid Wednesday ran a front-page story on Good Charlotte singer Madden, saying a small amount of cannabis had been found in his penthouse room and he had been asked to leave the apartment.

No charges have been laid against the American, who issued a statement saying he hoped the incident had not caused “too much drama”.

But Grammy Award-winning Seal weighed in on his side.

“Way to respect a guest in your country trash media, way to make us feel welcome,” he tweeted early Wednesday.

“Keep it up … sure we’ll be back next year. And yes, I say we, because it’s just a matter of time before you gun us all down.

“I for one will not stand by and watch you attempt to destroy my Brother, you gun one you gun us all!”

He also rounded on The Star casino complex in which Madden’s hotel was located, saying “Shame on the Star…you ask him to meet n greet a cancer victim in your hotel then send police to his room?? Nice… very classy… keep it up Judas. I’m done here.”

Seal, known for his hits “Crazy” and “Kiss From a Rose”, later blamed being away from his children for 11 weeks for the outburst which ended with him saying: “Can’t wait to go home”.

“I want to apologize for my rant earlier. Joel is one of my best friends and I was really hurting for him,” the backtracking star, formerly married to supermodel Heidi Klum, said on Twitter.

“I want to say I have loved being in Australia, I’ve loved working on The Voice and with an incredibly talented group of Australian artists.”

As well as Seal and Madden, Australian singer Delta Goodrem and Puerto Rican superstar Ricky Martin are on the television show’s judging panel.