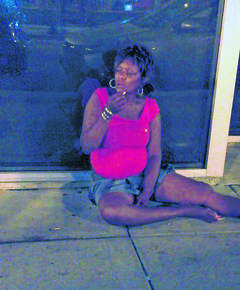 On a sweltering day last summer, traffic came to a standstill on a bustling stretch of Bryn Mawr Avenue in Edgewater, emergency crew sirens wailed and Chicago Police Officer Tom Rolon hurried to the scene.

The crackling voice in Rolon’s radio reported a woman foaming at the mouth and lying in the middle of the street; Rolon approached and instantly recognized her.

“She looked up at me and says, ‘Officer Rolon, I love you,’ ” recalled the now retired cop, who spent 17 years on foot patrol in Edgewater. “She got up, and all of a sudden she’s OK.”

Rolon recognized Shermain Miles because he’s seen her more times than he can count — drunk, half-naked, cursing and, on one occasion, lunging at another woman with a dinner fork.

Since 1978, Chicago Police alone have arrested Miles 396 times, mostly on the North Side — under at least 83 different aliases. Those arrests include 92 for theft, 65 for disorderly conduct, 59 for prostitution-related crimes and five for robbery or attempted robbery.

The frustrating truth: The system — strapped by overcrowded prisons and cuts to mental health funding — hasn’t been able to save Miles from herself or to help the communities she menaces. Nothing has worked. Not jail. Not prison. Not countless psychological exams for the woman described as being “acutely psychotic.”