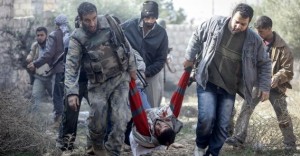 United Nations human rights office says almost 93,000 people were killed in Syria’s conflict by the end of April this year, but the true number could be “potentially much higher”.

The exact figure released on Thursday – 92,901 people – is much higher than the UN’s last death toll back in January of 59,000 people.

“The constant flow of killings continues at shockingly high levels,” said Navi Pillay, the UN high commissioner for human rights. “This is most likely a minimum casualty figure. The true number of those killed is potentially much higher.”

An average of more than 5,000 people have been killed every month since last July, while rural Damascus and Aleppo have recorded the highest tolls since November, the report said in its latest study compiling documented deaths.

The UN has acknowleged it has “underreported the number of deaths”, as evident when Human rights groups released higher figures.

Rupert Colville spokesman for Pillay, told Al Jazeera that there were huge constraints on estimating the number of people who had died in the conflict.

“We’re reliant, really, on some very brave activists who since the beginning of this conflict have done there best to keep track of how many people have been killed,” Colville said.

The report said UN teams on the ground and activists had found evidence of children being tortured during the conflict.

“We’ve seen entire families that have been slaughtered, including babies even, and then you’ve got children who have been killed by indiscriminate shellfire, missiles, aerial bombardment and a general, no-holds-barred conflict.”