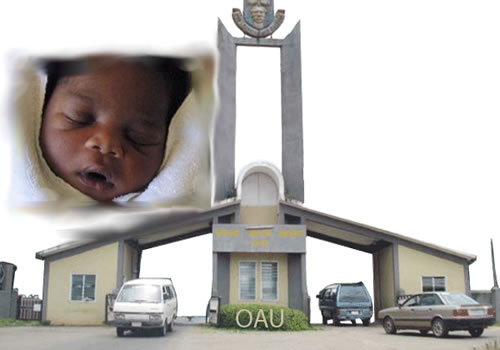 The Obafemi Awolowo University (OAU)  on Thursday clarified that Diana Rotimi Oyinlola, an undergraduate, who delivered a baby in the toilet on campus did not attempt to kill the baby.

There were reports in a section of the media since the incident happened at Moremi hall on Wednesday that Oyinlola attempted to ditch the baby.

However, a statement signed by  Biodun Olanrewaju, the university’s Public Relations Officer (PRO), on Thursday described the reports as “incorrect”.

Mr. Olanrewaju said that an interaction with the mother of the baby by the Security Unit of the university among other university officials, revealed that the student was willing to have the child.

He said that there was “no attempt whatsoever to conceal the pregnancy, not to talk of aborting it and wanting to flush the baby away through the Water Closet (WC).

“The truth is that there was a delivery of a baby boy by an inexperienced mother, who in her naivety, thought she was pressed by call of nature, while she was actually in labour pains.

“Prior to the childbirth, the inexperienced mother had discovered that she was bleeding and went to the toilet only to observe that something expelled into the water closet.

“It was at that juncture that she screamed and shouted for help when one of her friends Satope Oladayo, heard her distress voice and quickly traced her to the toilet from their room.

“It was when Satope entered the toilet and found the baby that she (Satope) called an elderly cleaner for assistance because the two of them were novice in childbearing,”  the statement stated.

The father of the new baby is a 400-level student of Mechanical Engineering, while the 20-year-old mother is also a final year student in the same university.