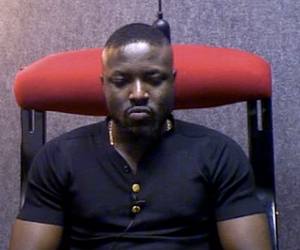 Since Ghanaian housemate Elikem entered the Big Brother house, it has been one girl to the other. One day he’s flirting around with Fatima and the next Pokello; later on he switches to Feza and Selly.

But it seems the ‘Hefner’ of the Big Brother House has finally decided to settle down.

In his Wednesday diary session, the Ghanaian housemate opened up to Big Brother that he would love to spend time with Pokello in the Rendezvous Room. Adding that ‘Selly is like a sister to me….. Fatima on the other hand is a very good friend of mine….’

He is still not to be trusted yet though, because the hunky Ghanaian had earlier on Monday nominated Pokello for possible Eviction out of the house.

Is Elikem playing mind games or is the brother really whipped!!!