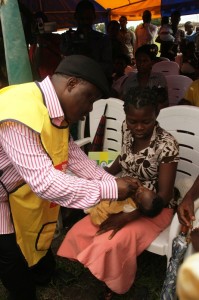 At least 2.3million Benue children have been immunised against childhood killer diseases in the just concluded Maternal, Newborn and Child Health Week organised by the Benue State Ministry of Health and Human Services.

Disclosing this in Makurdi, yesterday, while speaking to journalists, State Nutrition Officer, Mrs. Catherine Anger explained that children from ages zero to five were immunised during the period against polio, yellow fever, and measles. She also said vitamin A supplementation, de-worming tablets, were given to the children.

Anger said the week long exercise was carried out in conjunction with UNICEF, Helen Keller International and the World Health Organization, WHO.

She added that over 21,500 long lasting treated mosquito nets were distributed to pregnant women and nursing mothers during the week, adding that pregnant women were also given tetanus toxoid and iron folate to prevent anemia.

“The exercise recorded over 90 percent success because of the effective social mobilisation we embarked on prior to the commencement of the routine immunisation,” the Nutrition Officer said.