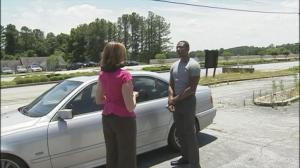 The Gwinnett County, Ga., man went shopping for a BMW and decided to take the car for a test drive. What happened next was disturbing. The cops pulled him over and cuffed him for obstruction, according to the  Daily News.

It all started when Sowells drove a BMW out of Philips Motors in Snellville for a test run. He drove onto a highway and was stopped by police officers soon after. According to Sowells, the officer said he didn’t have any tags on the car.

“I said, ‘No problem.’ I don’t have any tags on this car because it’s not my car,” Sowells said he told one of the officers. “The dealer is right there. We can get it all clarified.”

When Sowells asked the officers repeatedly to call and confirm his test drive with the dealership, they allegedly refused. Sowells said the officers asked to view a document that was strewn across the vehicle’s back seat. Not knowing what it was, he refused.

The officers then resorted to using bully tactics, Sowells claims. “They asked me to get out of the car. I said ‘I don’t feel comfortable.’ They commenced to open up the car door and they tried to drag me out of the door by my left arm,” he contends.

It was at this point that the officers called for backup.

The police report states that Sowells tried pulling away from the policemen. When the lawmen pulled out their tasers, Sowells then acquiesced and was arrested on the spot.

Sowells is upset by the incident because, “they’re treating me like I’m a criminal and I hadn’t done anything.”

Here’s what the Snellville police department had to say about the matter:

The officer observed a paper on the rear seat that appeared to be of the type dealers use when placing a vehicle for sale. He asked if he could retrieve it and Mr. Sowells refused. Based on his refusal to provide information and his passive and then active resistance, Mr. Sowells was charged with obstruction.

Police officials also state that when the dealership was contacted, no one answered the call. When Sowells and the officer drove to the dealership, “The dealer comes out to pick the car up and at this point I’m thinking we can all go home,” Sowells figured. “Everything is OK now. No, it’s not OK. I’m going to jail.”

But he is not taking the ruffian treatment that he claims to have endured by the officers lightly. The Georgia resident, who has never been arrested, plans on fighting his case to the hilt.

BTW, Sowells ended up purchasing the BMW after all!