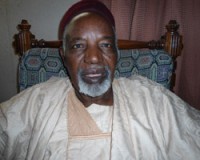 Former Governor of old Kaduna State, Alhaji Balarabe Musa, has claimed that the proscription of Boko Haram Islamic sect by President Goodluck Jonathan is an indication that the US and Israel are behind the security operations of the country.

He noted that the ban of the sect has made useless the Federal Government’s efforts at getting the group to surrender and accept amnesty querying why government constituted a committee to dialogue with the radical Islamist sect when it had plans to ban it.

According to him, the decision of the FG is a confirmation that the United States of America and Israel are in control of the nation’s security policy direction, adding that the ban should be linked to America’s prediction about Nigeria.

He said, “America has predicted that Nigeria will disintegrate by 2015. America has already declared that Boko Haram is a terrorist organisation. America has also declared the person who is leading the group as a wanted person and has placed a ransom on him.

“Now, we assume that America has seen Nigeria as a place to pursue terrorists and the action of Nigeria in proscribing the Islamic set is helping American policy.”

The former Governor disclosed that “there was a discovery of armoury in Kano, and the allegation is that, the arms are meant for Hezbollah, an organisation the US and Israel are fighting.”

He informed that “if the two countries are given the privilege of continuing to monitor the nation’s security operation that America would in no time threat Nigeria the way it is threating Iraq and Pakistan, adding that they will eventually invade Nigeria the way they have invaded the two Islamic countries.”

Alhaji Musa stated that “Dr. Goodluck Jonathan, as the President and Chief Security Officer of Nigeria, should have asserted himself on the line of security option he wants to pursue, particularly when he had already declared a state of emergency in the three northern states and also constituted a committee to dialogue with the Islamic sect.

“And from all indications the Amnesty Committee has started making progress by talking to members of the group, when government announced the banning of the group” he lamented.