Some kid suspects released by military authorities in Maiduguri on Friday said the Boko Haram sect paid them N5,000 each to burn primary schools and spy on soldiers. 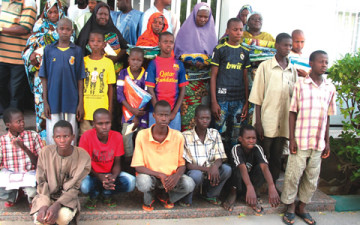 They were among 23 women and 35 children released to the governors of Borno and Yobe states by the Commander, 21 Armoured Brigade, Maiduguri, Brig-Gen. R.O Bamigboye, on behalf of the Chief of Defence Staff, Admiral Sa’ad Ibrahim.

The children, whose ages range between nine and 15 years, said they were given kegs of petrol by Boko Haram leaders and sent to burn schools in both states.

Borno State Governor, Kashim Shettima, government officials and journalists listened in bewilderment as the children narrated how they were used by the extremist sect to burn schools and spy on soldiers.

One of them said they were taken to the Yobe State capital, Damaturu, and told to spy on soldiers attached to the Joint Task Force and report back to the Boko Haram commanders.

He said, “We were taken to Damaturu. We watched out for the soldiers at their unit and reported back to them. We were reporting either when soldiers were at ease or enjoying themselves and when they were off guard and we were paid for doing that.”

Another child suspect said, “I usually helped Boko Haram to leak information on military activities so that they could attack them (soldiers). My last job was to travel from Maiduguri to Gashua to spy on soldiers before I was caught.”

Yet another said, “We usually help Boko Haram to carry stolen items each time and sometimes help them to give information about people they want to attack and sometimes even help to hide their guns after attacks. They pay us N5000 after every operation. I regret what I did, I want to go home and ask for forgiveness from my father and mother for what I did; I also want to go to school.”

One of the boys said he was arrested last year after he was overheard talking about the people who burnt a school in Maiduguri and failed to inform the military.

One of the teenagers said they were paid N5,000 and provided with fuel in kegs to set schools ablaze in Maiduguri.

The release of the suspects was done in line with the Federal Government’s amnesty deal.

In Borno State, 20 detainees, comprising six women and 14 children arrested between 2012 and 2013 were set free and handed over to Shettima for rehabilitation and reintegration.

The 20 detainees were mostly arrested in Maiduguri, Bama in Borno and Damaturu in Yobe State.

Bamigboye, who supervised the handing over, said he was acting on behalf of the Chief of Defence Staff, Admiral Sa’ad Ibrahim.

This, he said, was in line with the directive of President Goodluck Jonathan to the army.

He explained that the detainees were arrested in connection with the roles they played in the insurgency.