Brazil’s President Dilma Rousseff has unveiled a series of reforms in an attempt to end days of nationwide protests against bad public transport and healthcare, corruption, and the billions of dollars of spending on World Cup preparation.

In a televised address on Friday, she said she had an obligation to listen to the voices on the streets but dialogue needed to be established after nearly two weeks of massive protests.

The Brazilian president said that her government would create a national plan for public transportation in cities – a hike in bus and subway fares in many cities was the original complaint of the protests.

She also reiterated her backing for a plan before Congress to invest all oil revenue royalties in education and a promise she already made to bring in foreign doctors to areas that lack physicians.

Rousseff pledged to maintain order on the streets, condemning the acts of violence and vandalism that have marred the country’s largest protest in 20 years.

“I’m going to meet with the leaders of the peaceful protests, I want institutions that are more transparent, more resistant to wrongdoing,” Rousseff said.

“It’s citizenship and not economic power that must be heard first,” she said.

“We need to oxygenate our political system … and make it more transparent.”

Rousseff has been facing mounting pressure over the quality of public services and the high cost of staging the World Cup. 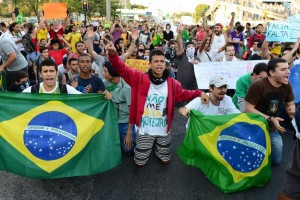 An estimated 1.25 million people took part in about 80 rallies across the country of 194 million people in an intensification of the movement which started two weeks ago to protest at public transport increases.

Social media networks have been key to the organisation of the mass protests, with demonstrators using the slogan “It’s more than just 20 cents” – a reference to the bus fare rises – to rally people to their cause. The movement has no political hue and no clear leadership.