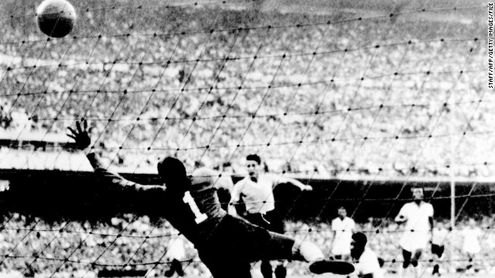 It was the moment the South American country’s love of the game, and of its most prestigious competition, became a dangerous obsession.

July 16, 1950, the final match of the final group stage. Brazil faced Uruguay, and a draw would be enough to see the host crowned as champion.

The champagne was put on ice when winger Friaca gave Brazil a 1-0 lead just after halftime.

But the samba beat was silenced when Juan Alberto Schiaffino equalized for Uruguay – and then the unthinkable happened.

Uruguay came forward, Brazil goalkeeper Barbosa stepped off his line, Alcides Ghiggia scuffed a low shot towards the near post … and the ball nestled in the back of the net.

A nation’s hearts were broken. Lives were forever altered and a national obsession was born.

The 63 years since have seen Brazil become football’s dominant force. The five World Cups won by “La Selecao” is more than any other country in the quadrennial competition’s 83-year history.

But not one of Brazil’s quintet of triumphs has banished the shadow cast by the failure of Moacyr Barbosa Nascimento and his teammates.

“The idea the rest of the world has about Brazil, and perhaps Brazil has about itself to a certain extent, is that it is all about ‘joga bonito,’ it is all about the beautiful game,” says Jonathan Wilson, journalist and author of “The Outsider: A history of the goalkeeper.”

“Actually it is all about winning in Brazil, far more than anywhere else despite the perception,” he told CNN. “There’s no such thing as heroic failure in Brazil.

“Barbosa was named goalkeeper of the tournament, but he was scapegoated in Brazil because of what happened in the final game.

“He didn’t get picked for the next couple of years. He was a very good goalkeeper, but all he is remembered for is that one mistake.”

The error which led to Uruguay’s second goal hung over Barbosa until his death in 2000.

But the saddest moment of his life, he said, was not in the final or its immediate aftermath.

Some 20 years later, a woman in a supermarket pointed towards him and declared to the young boy by her side, “Look at him, son. He is the man that made all of Brazil cry.”

“Under Brazilian law the maximum sentence is 30 years,” Barbosa remarked on his 79th birthday, just two weeks before he passed away. “But my imprisonment has been for 50 years.”

The disappointment looms large in Brazil’s national psyche, and all the more so with the country to host the World Cup again next year for the first time since that fateful day.

“The Brazilian team is not in the best moment.”

One player of whom a huge amount is expected is Neymar, a flamboyant attacker recently signed by Barcelona who is frequently hailed as “the new Pele.”

If Brazil is to finally win the World Cup on home soil, the fleet-footed, shock-haired attacker will have to prove he has shoulders broad enough to carry a nation’s hopes.

“Listen, winning the World Cup is very hard because it is a box of surprises. No doubt Brazil is one of the best, but this doesn’t mean Brazil is going to win … The best players in Europe, they are Brazilian,” Pele told CNN.

“In Brazil we have had a lot of excellent players like Zico, Tostao, Rivelino, Pele, Ronaldinho, but the last two years we have had Neymar.

“He is very talented. I hope he has luck in Barcelona. I didn’t like it so much because he used to play in my team, Santos, I lost a good player. He deserves to go to the best team.

“I said to be the new Pele would be very difficult, because my mother and my father, they closed the machine (gestures). But no doubt he is one of the best players who we have in Brazil.”