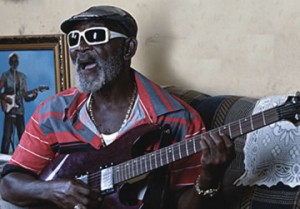 It has been reported that veteran highlife musician, Fatai Rolling Dollar, is dead.

Born 22nd July 1926, Rolling Dollar was known for his verve and dexterity on the guitar.

His zest for life and energy, even in old age, was also a marvel to all who beheld him perform.

The 85-year-old highlife music icon, who had his career revived at a point when it seemed all hope was lost, is reported to have passed away today June 12, 2013 at Ahmadiyya hospital located in the Igbado-Iyaiye environ of Lagos.

He was admitted into the local hospital weeks ago, although he came out last week to say he’s back on his feet and warming up to perform again.

A few popular names in the Nigerian showbiz industry are already mourning, with many OAPs, musicians, actors and journalists sending out condolences on different platforms.

He made highlife music very popular in the 60s and 70s. He had his career revived and made a comeback in the late 90s revamping the evergreen classic ‘Won kere si number wa’.