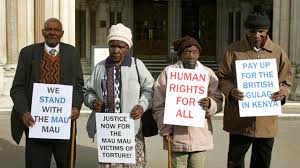 Britain has agreed to compensate Kenyans tortured during the Mau Mau uprising against colonial rule in the 1950s, Foreign Secretary William Hague has said.

Expressing “sincere regret” on Thursday, Hague said that the abuses had taken place and told parliament the government would pay a total of $30.8m to 5,228 clients represented by a British law firm.

A lawyer for the vicitms had said on Wednesday the settlement had been agreed without disclosing the sum.

“The negotiations have included everybody with sufficient evidence of torture. And that number is about 5,200,” Kenyan lawyer Paul Muite said.

Negotiations began after a London court ruled in October that three elderly Kenyans, who suffered castration, rape and beatings while in detention during a crackdown by British forces and their Kenyan allies in the 1950s, could sue Britain.

The torture took place during the so-called Kenyan Emergency of 1952-60, when fighters from the Mau Mau movement attacked British targets, causing panic among white settlers.

The $30.8m compensation would work out at $5,891 per claimant in a country where average national income per capita is $821.

The foreign office said in last month’s statement that “there should be a debate about the past”.

“It is an enduring feature of our democracy that we are willing to learn from our history,” the statement said.

“We understand the pain and grievance felt by those, on all sides, who were involved in the divisive and bloody events of the Emergency period in Kenya.”

The Mau Mau nationalist movement originated in the 1950s among the Kikuyu people of Kenya. Its loyalists advocated violent resistance to British domination of the country.

The Kenya Human Rights Commission has estimated 90,000 Kenyans were killed or maimed and 160,000 detained during the uprising.

Caroline Elkins, a Harvard history professor who acted as an expert witness in the case launched in 2009, said the settlement would be the first of its kind for the former British Empire.

“It should be seen as a triumph,” Elkins told Reuters during a visit to Nairobi for the British announcement.

Britain had first said that responsibility for events during the Mau Mau uprising passed to Kenya upon its independence in 1963, an argument which London courts rejected.