Tragedy struck at the University town of Nsukka, Enugu State after a middle-aged carpenter allegedly hanged self at Uwani Ugwu, Nguru in Nsukka Local Government Area. 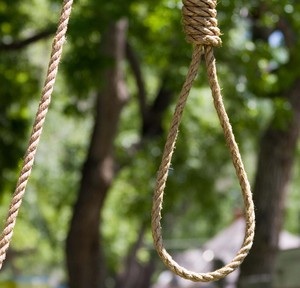 The carpenter who was simply identified as Tochukwu Obodo, 35, hailed from Ovoko in Igbo-Eze South Local Government Area, Enugu State, allegedly hanged self in a mango tree close to his residence at Uwani, Nguru.

Crime Guard gathered that the carpenter returned from his Ovoko Community Monday morning around 11am only to allegedly hang self in the night of same Monday. It could not be ascertained whether he left a suicide note as his lifeless body was still dangling on the mango tree when Crime Guard visited the scene of the incident.

A tenant in the yard Anthony Ezema, who spoke to Crime Guard said the deceased carpenter slept in the same bed with his younger brother, Chinweugo Obodo but he, the brother was surprised to see Tochukwu hanging on a mango tree the next morning.

“Nobody can say exactly why he allegedly hanged self but I can tell you he did not quarrel with anybody the previous day that would warrant such dastardly act,” he noted.

As at the time of this report, people were still trooping to the scene of the incident to have a glimpse of the carpenter who was well known within the area. Enugu State Police Public Relations Officer, PPRO, Ebere Amarizu told Crime Guard on phone that Police have commenced full investigations to unravel the circumstances surrounding the alleged suicide. “We have been informed of the alleged suicide of Tochukwu Obodo and Police are on top of the incident,” he said.