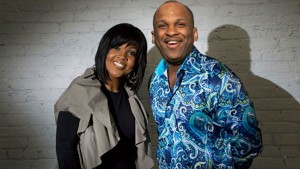 International gospel megastars Cece Winans and Donnie McClurkin sent Soweto into hysteria when they performed at the Grace Bible Church on Sunday.

The venue was packed to capacity with fans, local artists and media personalities, all of whom couldn’t wait to witness the Grammy Award winners live on stage.

The duo lived up to expectations, with Cece performing songs such as ‘Hallelujah’ and one of her biggest hits, ‘Alabaster Box’. The song pushed Cece to her knees, symbolising true worship.

Cece got the audience on their feet when she performed ‘Waging War’, which is one of her hit songs from the album ‘Thy Kingdom Come’.

Ten-time Stellar Award winner Donnie performed hit after hit from his albums and had fans on their feet singing along. Amongst some of his backing vocalists was South Africa’s very own Mahalia Buchanan, who sang ‘Great Is Your Mercy’. She must have been the luckiest lady in the hall, getting a compliment from the legend himself: “Mahalia just messed me up. South Africa, you have to appreciate the jewel you have right here.”

When his set was finished, the crowd begged for more. Donnie gave in to their requests and sang the South African national anthem. This was not the only song he did in Zulu, with the American also performing ‘Holy’ in the South African language. The song took his performance to a higher level, proving why Donnie is one of the best gospel artists around.

“The performance was life changing. I felt a taste of how it’s going to be in heaven,” Baakedi Mathosa, one of the attendees, said after the show.