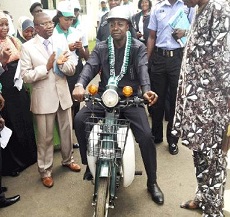 The 80cc engine motorcycle was designed and manufactured by the National Engineering Design and Development Institute (Nnewi), a subsidiary of NASENI.

Speaking at the launching in Anambra State, the Executive Vice Chairman (EVC) of the agency, Dr.Mohammed Haruna, said the made-in-Nigeria motorcycle was proof of the potential capability of the agency to provide necessary engineering and technology infrastructure for Nigeria’s industrial development.

The EVC explained, “The Federal Government, which the Agency is part of, has promised Nigerians a better socio-economic deal by year 2020 even as Mr.President has also committed the government to elevate the economic status of Nigeria to be among the 20 fastest growing economies in the world by 2020.”

Dr.Mohammed Haruna remarked, “Nigerians must demonstrate real capacities for engineering technology development and production of manufactured goods and a service, saying that is why NASENI had taken this bold step to demonstrate to Nigerians that Mr.President’s dream is both realizable and is even being realized.”

“About 20 million Nigerians today rely on motorcycles as a means of transport and many unemployed youths and men support their families or earn a living from running motorcycle as a commercial venture. Imagine the large number of jobs that will be created if only Nigeria could close her borders against the importation of motorcycles and allow entrepreneurs to invest in the manufacturing of the parts including production of the motorcycle locally.

“Nigeria, no doubt, has all the materials needed to produce motorcycles in Nigeria, 100 percent. NASENI has both the raw materials survey, their locations, equipment and the critical human capacity, design, feasibility studies and the business plan for running a successful plant to produce motorcycles. What we are waiting for now is for Nigerian entrepreneurs to come forward and take advantage of this profitable investment to manufacture of the motorcycles,” he stressed.

He reiterated the need for the private sector, especially the Small and Medium Scale Entreprises (SME’s) to collaborate with the agency by buying into the technology and mass producing them, stressing that doing so will not only contribute immensely to the nation’s Gross Domestic Product (GDP), but will also depopulate the growing unemployment market.

“The law establishing NASENI and its institutes does not allow it to embark on full scale manufacturing of products and or become full scale player in the market but for every technology and engineering products developed within the agency system to be ceded to the private sector for commercial purpose or mass production. Its mission includes hitherto establishing and nurturing appropriate dynamic science and engineering infrastructure base for achieving home initiated and home sustained industrialization through the development of relevant processes, capital goods and equipment necessary for job creation, national economic well-being and progress,” he added.

Manufacturing a motorcycle may not be rocket science or considered a landmark in other climes, but in Nigeria, with its comatose economy, decrepit manufacturing sector and untapped industrialisation potential, it is an avant-garde breakthrough. What NASENI has done will hopefully reverse the trend that is fast becoming a major feature of our national life where everything foreign is seen as superior to local breeds.