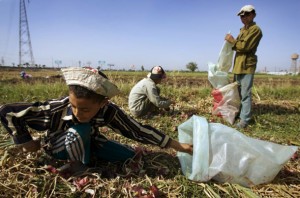 About 9.3 per cent of Egypt’s children as young as five work, according to a report by the Central Agency for Public Mobilisation and Statistics (CAPMAS), suggesting shortcomings in legislation to prevent child labour.

According to the report, issued ahead of the World Day Against Child Labour on 12 June, the number of working children between the ages of five and 17 is 1.59 million, or 9.3 per cent of all children.

“Hundreds of millions of girls and boys throughout the world are engaged in work that deprives them of adequate education, health, leisure and basic freedoms, violating their rights. Of these children, more than half are exposed to the worst forms of child labour such as work in hazardous environments, slavery, or other forms of forced labour, illicit activities such as drug trafficking and prostitution, as well as involvement in armed conflict,” a recent report by International Labour Organisation (ILO) reads.

In Egypt, children are extensively put to work in agriculture, according to Ghada Barsoum, assistant professor at the American University of Cairo, and an expert in the field of youth, gender and work. “Employers hire children because they accept the least paid jobs which adults would not take,” Ghada said, adding that blocking children from that sector would lead to a hike in food prices.

“Egypt has very little data on domestic workers, whether children or adults. We do not have any specialised surveys in the field,” Ghada stated. The 2013 World Day Against Child Labour calls for action to encourage a global movement to fight child labour. It also addresses legislative and policy reforms in an attempt to combat child domestic workers and to ensure proper work conditions and protection of young workers.

“Mostly male children are sent to the field; they handle pesticides though they are not supposed to, and work under very harsh conditions. Female children stay home and look after family animals. In very poor families, females are sent outside for work,” Ghada said.

“The latest government project on child labour was Susan Mubarak’s ‘Red Card Campaign to Child Labour’. No significant governmental projects have been carried out in the field since then,” Ghada added.

The ILO called for measures to reduce poverty as a way to combat child labour.

Governments should also improve education and ensure child labour is included in national surveys, according to the ILO. The organisation also stressed the role of employers, workers organisations and civil society in acting against child labour. [GN]