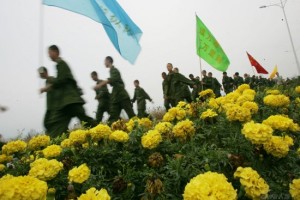 The Xu Xiangyang Education and Training Workroom, or the Walking School is an atypical educational facility which enrolls Chinese problem children and forces them to walk up to 1,000 kilometers through across the country in order to teach them discipline and make them take responsibility for their actions.

In a Chinese society which leaves no room for failure, spoiled kids, school dropouts and troublemakers risk getting left behind in a competitive race for success. To make sure that doesn’t happen, parents who have exhausted all other options enroll their children in the Walking School, a special boarding school based in Chengdu which forces them to march cross-country all day long and teaches them military discipline. Founded by ex-army veteran Xu Xiangyang, this correctional facility is inspired by the Red Army’s long march in the 1930s, and has a reputation of turning ineducable delinquents into outstanding members of society. Children between between 8 and 18 are brought here, often by force, and left to deal with the hardships of military life to hopefully change their ways.

With China’s one child policy and the country’s booming economy, many city kids are starting to take everything for granted. Showered with gifts by their parents, they grow up as little princesses and emperors and some of them lose interest in school, develop bad manners or turn into delinquents. There is no place in Chinese society for such bad apples, so the Walking School tries to get them back on track before it’s too late. In this brutal mobile school, children are not only forced to walk tens of miles every single day, but also sleep in trucks, eat their frugal meals on the side of the road, wash their own clothes by hand and take orders like good little soldiers. They learn discipline, responsibility and authority. ”By walking with and living in a group, they will be able to shake off their laziness and selfishness,” Xu Xiangyang says. The struggle to educate his own rebellious son inspired him to found the Walking School, and he is convinced marching long distances helps the young recruits learn about themselves and others.

The price of the program is 2,000 yuan (US$250) per person each month, but for many parents it proves a great investment, as their offsprings start to look back  on their previous behavior and acknowledge their mistakes. According to one of the military instructors, “walking is the most basic training, it wears them down and stretches them to the limit. When they are tired they start to reflect.” Bleeding blisters, severe leg pain and exhaustion will do that to a person. So if you thought Western brat camps were tough, think again…