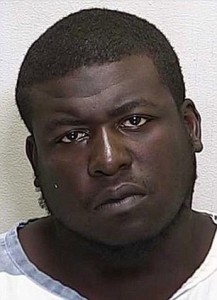 A 31-year-old man has been charged with first-degree felony murder after shooting three of his co-workers dead because they mocked him in a practical joke, according to police. Andrew Joseph Lobban allegedly took issue with a video his colleagues had taken of him being fooled in a prank. The men, who all worked as bouncers at the Ocala Entertainment Complex, Florida, had recently gone to a local shooting range. Lobban’s colleagues rigged his gun so it would misfire and then filmed his confusion and struggle to control the firearm on their mobile phones.

On Saturday night, it seemed the joke came up again while the friends were out drinking. Police said Lobban cracked over the practical joke and shot dead three of his colleagues in his rage. The shooting occurred close to 1am outside local bar AJ’s when the men were leaving to move on elsewhere. Sgt. Angy Scroble told the Ocala StarBanner that he ‘kept harping on’ about the joke video. David Rutherford was in the bar when the shooting happened. ‘All you hear is the bouncer yelling, ‘Get back’, Rutherford told WKMG. ‘It was hard not knowing what was going on. You peek out and you see guys laying on the ground.’ Witnesses claimed Lobban was the gunman.

After the three men were shot, he was allegedly seen heading north, and was eventually arrested later that morning at his girlfriend’s house in Silver Spring Shores. The victims were identified as Benjamin Larz Howard, 23, of Belleview; Jerry Bynes Jr, 20; Josue Santiago, 25, both from Ocala. All three victims were shot in the head. Two were reported dead on the scene while one was later pronounced dead at the hospital.

According to the affidavit, Lobban admitted to the shooting. He said he dumped a 9mm pistol and a black t-shirt in a nearby dumpster, both of which were discovered by investigators. He went on to say that he only meant to shoot Santiago, and the other two were accidents. The men’s boss, Bobby Tillander, was in shock at the incident and said it was out of character for Lobban, who he described as quiet and reserved. ‘If he said 10 words to you during his shift, he said a lot,’ he told the Star Banner.

Ocala Mayor Kent Guinn called the shooting ‘ridiculous.’ ‘It makes no sense. It’s senseless that three people lost their lives. It’s a sad situation.’ Santiago, who dreamed of owning his own club one day, leaves behind two young children – a son and a 2-month-old daughter. ‘He was a gentle giant, a great son, a provider and a good father to his family,’ Santiago’s mother Maria Santiago told the StarBanner.

Bynes was also the father to a 2-and-half-month-old daughter. ‘He was a good kid, liked to laugh and joke. He wanted everyone to be happy,’ Bynes’ mother Dawn Acosta Romaine told the StarBanner. On Sunday night, around 100 people gathered outside of the Ocala Entertainment Complex to hold a candlelight vigil. Lobban is currently being held in Marion County Jail without bond.