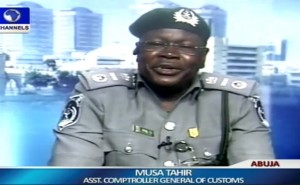 Nigeria’s colonial masters should be blamed for the prevalence of the country’s porous borders, an Assistant Comptroller-General of Customs, Musa Tahir has said.

Mr Tahir disclosed this while speaking as a guest on Channels Television’s breakfast programme, Sunrise Daily on Monday.

He said, “When people talk about the porosity of the borders, there’s one thing that comes to mind; you have to remember that these borders were creation of our colonial masters and they were arbitrarily drawn across the borders.”

Acknowledging that Nigeria’s borders lacked adequate equipments to check what enters and leaves the country, the Customs boss noted that since the current Comptroller General of the NCS assumed office, there has been increased surveillance of the nation’s borders by personnel of the NCS.

“Since assumption of power by the present Comptroller General, Alhaji Abdullahi Inde Dikko, he has focused on the issue of borders. One of the first things he did was to ensure that the welfare of the officers is enhanced.

“Not only that, he made sure that he purchased more than 500 patrol vehicles. Additionally, he sought for permission and some AK47; he also purchased body armour for officers. These and other things to make sure that officers are highly empowered,” he said.