Mikel Obi rarely scores but on a night that he won his 50th cap for Nigeria he scored the goal that had given the Super Eagles hope in the game against Uruguay in the FIFA Confederations Cup holding in Brazil.

The goal from the Chelsea star in the 37th minute of the Group B game was a response to the opener by Diego Lugano who hit the first goal of the game with a tap-in for the South Americans in the 19th minute. 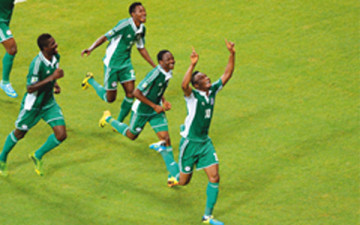 Mikel whose last goal for Chelsea was in January 2007 off a cup game, was the heart of the team in a match he scored the fourth for his country. Before the quality goal in Salvador, the midfielder last scored for the country in Calabar in October 2012. But if Mikel’s goal was superb, Diego Forlan’s hit was priceless as the Uruguayan put his country ahead in the 51st minute on the night he won his 100th cap.

That goal became the difference between both countries with the South Americans gaining the better chance of reaching the semi-finals. They will play against the competition underdogs Tahiti on Sunday while the Eagles have the uphill task of beating world champions Spain to have any possible chance to qualify. All the Uruguayans need is to beat Tahiti more than the 6-1 handed them by Nigeria.

In the first match of the night, Spain won by a landslide as expected but tiny Tahiti emerged with their reputation enhanced and their dignity intact despite their 10-0 loss to the world and European champions.

Fernando Torres scored four times, and missed a penalty, David Villa hit three, David Silva two and Juan Mata one as Spain scored double figures for the third time in their history. The outcome of one of the most unlikely matches ever to take place in a senior FIFA competition was never in doubt and even Tahiti coach Eddy Etaeta said before the game his side’s chances of winning were “quite impossible”.

Tahiti’s first-ever meeting with European opposition was more of an occasion and even though the Pacific Islanders lost they will always remember the day they played the world champions at the revered Maracana Stadium.