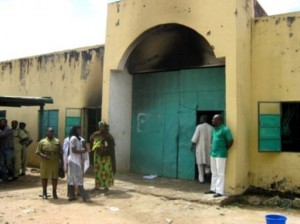 Some convicts at the Medium Security Prison, Kuje, Abuja, on Monday pleaded with the authorities to consider them for amnesty.

Making the appeal in Abuja during the launch of the 2013 National Human Rights Commission audit of prison, police and other detention facilities,convict, Sankara Young said, “Since the inception of the prison, there has never been amnesty; it is only those whose cases were heard by the Magistrates’ courts that are released once in a while.

“We beg the appropriate authorities to look into our plight and grant us amnesty as some of us have been reformed through vocational skills,” he said.

Young also appealed for the transfer of the cases of some awaiting trial inmates, which were in the court of Justice Abubakar Talba, who was suspended last year by the National Judicial Council, to other courts.

Young said he was serving a 15-year jail term but noted that more than 400 inmates whose cases were in Talba’s court had not gone to court since the judge’s suspension.

Eze said he had been awaiting trial for more than seven years.

He said it was disheartening that those awaiting trial had been separated from their families for too long without conviction.

“I believe the Nigerian prison should be a place of reformation and not deformation, but our judiciary is not helping matters at all.

“Some people have been in prison for over 10 years without trial. When you go to court, it is either the prosecutor will not be around or the judge will not sit.

He therefore called for a special committee that would monitor activities in courts to ensure that inmates were attended to on time to avoid unnecessary delays.

In his response, Executive Secretary of the National Human Rights Commission, Mr Bem Angwe, said the commission would use its power to ensure the protection of the rights of inmates.

He also promised to meet with relevant stakeholders to ensure a lasting solution to the slow pace of justice delivery in the country.

“I have directed that all matters of awaiting trial be compiled and the prison service has appointed legal officers across the country and they have commenced work,” he said.