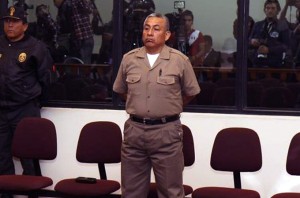 A Peruvian court sentenced one of the last historic leaders of the Shining Path Maoist guerrillas to life in prison on terror, drug trafficking and money laundering charges.

Florencio Flores Hala, or “Comrade Artemio,” raised his fist in defiance on Friday as the sentence was read at a prison on the Callao naval base west of Lima.

His lawyers vowed to appeal the ruling and seek an annulment of the charges.

Police and army units wounded and captured the guerrilla leader in February 2012 in the Peruvian jungle.

“Artemio” led attacks against security forces in the central part of the Peruvian jungle, a known hub of drug gangs where he took refuge after the 1992 capture of Abimael Guzman, the founder and historic leader of the Shining Path also held at Callao.

During the trial, “Artemio” denied being a terrorist and any links to the drug trade, calling himself a “revolutionary” in the “heroic people’s war,” a conflict that left 69,000 people dead or missing in Peru between 1980 and 2000.

The government crushed the Shining Path and a rival leftist guerrilla group, the Tupac Amaru movement, during the struggle.

The Shining Path has largely been crushed by the army but remnants of the group remain, and they often attack military patrols in jungle areas.[AFP]