The Assistant Commissioner of Police, Area E, Festac Town (Lagos), Damien Okoro, was one of the police officers conferred with meritorious award and certificate of bravery by President Goodluck Jonathan at the recent event to mark the Police Week in Abuja. 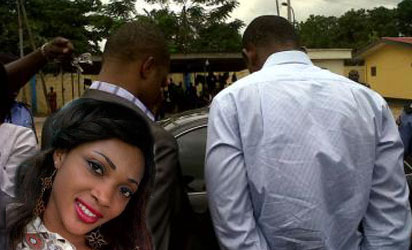 The award was in recognition of his groundbreaking investigation into the gruesome murder of Cynthia Osokogu, a postgraduate student murdered by her Facebook friends in Lagos.

Four people are currently being prosecuted for Ms. Osokogu’s murder. Ms. Osokogu, 24, was allegedly drugged and murdered in a hotel room last July in Lagos.

Okwumo Nwabufor and Olisaeloka Ezike are charged, for Ms. Osokogu’s death, with conspiracy to commit murder, murder, and felony. Osita Orji, a Pharmacist who sold the Rophynol drug to the alleged murderers, is accused of reckless and negligent act; while Nonso Ezike, who pawned the deceased’s Blackberry phone, is charged with possession of stolen property.

Mr. Okoro in an interview after he received his award stated that Ms. Osokogu’s killers offered him N15million to compromise the case. He spoke about the pressure from high place o limit the investigations. He also spoke about his love for unraveling crime and the need for police officers to improve themselves on the job.

Tell us briefly about the investigation into Ms. Osokogu’s murder

The investigations into the murder of Ms. Osukogu was not an easy one as she was killed in such a manner that it would take a very intelligent officer to arrest her killers. There was no complainant, no means to locate her family as her phones were stolen by her killers . We also could not Identify her or say this was where she was coming from. Investigation into the killing took my officers and I to Cotonou in Benin Republic where we went undercover and broke the barrier of the Interpol which would have slowed down the case. We also went to Anambra State University.

When we got the call log, it was about 300- 400 pages. We did a deep study of the call log which involved forensic analysis. It was tasking analyzing all the activities on social media- Facebook, Twitter. I took a great risk putting my life and that of my officers on the line to go after the killers. Not minding the grave danger, we made arrests at about midnight; until 3.15am we were in operation. It was the painstaking forensic investigation we did that showed the suspect was economical with the truth about his location. He was in Lagos State but claimed he was in Abuja.

Did you think that you will be celebrated for arresting Cynthia’s killers?

My mind was not on any award. I was just doing what a police officer is expected to do in such a situation to find the killers. I am very glad and I feel elated at the awards and certificates I have received and the President’s award is a great fete that is not common. I am fulfilled and I thank God that I was honored; (the honour) is much more than the N15million I was offered as bribe. Today, I’m being celebrated and that is all I wanted. I received the National Orientation Agency, Security Watch Africa awards, the best Area Commander in Nigeria award in 2012 also, the IGP award and the President’s meritorious award. If we had collected money, there would be no celebrations today.

The suspects offered me money for us to kill the case. We were pressured from everywhere not to arrest other suspects. I got furious when Eche, the killer was bold enough to say that I should remove the handcuff from his hands; that he wants to go home and his people are coming to “see” me. He asked me why I was bothering myself with “that prostitute.” I replied that he was not going anywhere. He thought I was being tough so he offered N10million. I just stared at him and told him- “you cannot go anywhere.” He thought I was looking for more money so he increased his bribe to N15million. At this point, I became very furious with him that he had no remorse after killing a human being in that manner. I stood my ground and told him that he cannot go after committing such a heinous crime. He thought I was joking but got the message when my men took him away and locked him up.

If I had collected that N15million, we would not be talking about this award. The N15million is nothing compared to the lifetime award I received from the president. This award is not a mean fete. I will cherish the award all my life. It shows that if one works hard and is dedicated, the person would be recognized and honoured.

How did you achieve so much despite the challenges of your job?

The technology involving forensic investigation has been digitalised. Using computers and the social media to crack cases requires tech knowledge. What this entails is updating one’s knowledge and expertise. I had to enroll in a technology school where I acquired knowledge in forensic investigation. Also, there is the challenge of human, political and economic pressure trying to make you compromise. When highly placed individuals call you and want the case compromised it makes the job difficult but an astute policeman must stand his ground and say no.

There are a lot of training programme for officers as the Inspector General of Police, IGP, Mohammed Abubakar is one person that believes in training and retraining; there courses available to make officers excel on the job. Like I said, success on the job is a personal aspiration and desire. An officer should have that high innate passion to achieve more – to become an achiever of international repute. This kind of mindset will make you go far in life.

Would you have preferred another profession?

It has always been on my mind to join the police force even while I was in school. I am from a family of policemen and I got attracted to the profession I loved so much and I don’t regret it . If I am reincarnated, I would still become a policeman. My experience in the Police Force has been awesome. I advise other officers to train and retain themselves especially in modern policing and the use of the web and social media. It is left to them to become achievers on the job.

What is the lesson here for other police officers?

Every officer should strive to make a name for his or herself and put themselves in the echelon of crime busting which is fundamental in police work. The aspiring officer should look for a mentor. I own all the achievement so far to the IGP Mohammed Abubakar . He is my mentor and I adore him. I have known my boss for over a decade and I have worked with him and learnt from his wisdom and knowledge. He was the one who encouraged me to read law. The Lagos State commissioner of Police, Umar Manko, is also a policeman I adore. He gave me the enabling environment and the necessary support to carry out investigations. If he had said that Cynthia’s case should be transferred, then we would not be saying anything about awards and being celebrated.

Aside from playing a leading role in resolving the Cynthia Osokogu murder trial, Mr. Okoro has also led various other high-profile criminal investigations. These include:

– The robbery at NAHCO in Lagos State where a bank was broken into and a huge amount of local and foreign currencies was carted away. He and his team arrested the robbers and recovered all the cash.

– He was also the brain behind the arrest of Sierra-Leonean rebel leader, Faondi Sanko, whom he handed over to the army in Abuja.

– In 1997, ACP Okoro and his team recovered the spare engine of Boeing 747 GASS cargo, stolen from the tarmac . He was given N1million to compromise the case but he arrested the suspects and charged them to court.