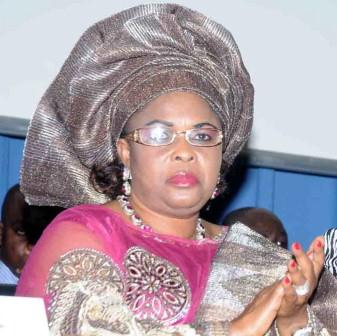 The wife of the president, Mrs Patience Jonathan, on Sunday expressed her happiness over the increasing number of organisations devoted to caring for needy children in the country.

Jonathan gave the commendation in Abuja at the official inauguration of the Crying Child Foundation and the golden jubilee ceremony of Hajiya Fatima Bamanga-Tukur, wife of the PDP National Chairman.

“I wish to state that I am highly pleased by the increase in the spread of organisations devoted to the care of children needing help and care, which has been my own overwhelming passion, as you all know.

“I therefore, want to use this occasion to encourage you all to commit your God-given resources in assisting some of these under-privileged children in our society.”

The first lady congratulated the celebrant for attaining the golden age, describing her as a “passionate humanitarian whose joy and fulfilment are derived from the well being of disadvantaged persons around her”.

Jonathan stressed that the quality of anyone’s life was measured by the way he or she “meaningfully contributed to society by touching and improving the lives of the less-fortunate ones”.

Governors Theodore Orji of Abia and Jonah Jang of Plateau, respectively, were among others who sent goodwill messages at the ceremony.

More than N140 million was raised at the event, attended by many prominent people, including ambassadors from 14 countries, governors, senators and PDP stalwarts.

Children from the foundation thrilled the guests with musical performances. (NAN)