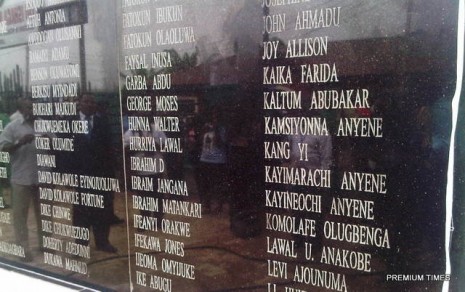 Tears flowed freely down the cheeks of relatives of the victims of the ill-fated Dana Air Flight 992 that crashed in the Iju/Ishaga area of Lagos State June 3 2012, as Governor Babatunde Fashola unveiled a cenotaph to mark the first anniversary of the tragic incident yesterday.

The unveiling of the cenotaph did not go without a mild drama as the ground victims of the crash protested the non-payment of the compensation initially accepted by the management of Dana Air.

Before unveiling the memorial cenotaph, Fashola described the tragic air disaster as one crash too many, saying the incident brought untold hardship to various families across the world.

The governor noted that the state government did all it could; from the management of the crash site to the identification of the remains of the victims through DNA test which gulped N22m.

He said: “We had experienced a tragic accident whose cause remains yet unknown. But while the cause was at the time unknown, our collective tragedy was immediately unfolding. Many nations and their nationalities from India, China, the United States and Nigeria were united by a common grief: the loss of their loved ones.  It was an accident that took place in Lagos. But its impact and reach were beyond our borders. Men and women, Muslims and Christians, Hindus and atheists became joined by a common pain. It was a horrific day.

“A year may seem like a long time, but for the families and friends of the men, women and children we lost, that day does not feel like history. The memories of that day are probably as fresh as they are painful, particularly today when you are forced to confront the thoughts you may have pushed to the innermost recesses of your minds, just to enable you get from one day to the next.

“What does one say at a time like this? What does one say when words will never be enough? Many of us cannot even begin to imagine how great your suffering must have been this last one year. We can only empathise with you, in the vain hope that our empathy will bring some relief. We can only utter words we know will never fill the voids but which we nonetheless pray will bring some comfort.”

Recalling the stories of families of victims of the air crash, Fashola also remembered the ground victims of the crash who were killed by the flight they never boarded.

He charged the decision makers, particularly those in the aviation sector, to place priority on the safety of lives of the people rather than profit, warning that the worst tragedy to befall the nation would be to forget the pains of the crash.

“It will be more important for all who have authority and responsibility to act with a preventive purpose to ensure that it does not happen. The watchword for decision-making must be safety and not profit,” he added.

On the cenotaph, Fashola said, “This monument will stand as a permanent memorial to these family men, women and children; and we will cherish each of their stories – stories of potential and of fulfilment, stories of true heroes.”

Minister of Aviation, Stella Oduah, who was in Abuja to attend a similar event organized by the Federal Government, was represented at the Lagos memorial by the permanent secretary in the ministry, George Affam.

The minister in her message read by Afam assured that the FG would put in place measures to forestall a recurrence, adding that government was working with the management of Dana Air to ensure compensation issues were amicably resolved.

Dr Ben Ayene, who lost six relatives to the crash, expressed displeasure with the delay in the technical report of the cause of the crash, even as he lamented the continuous operation of the airline in spite of the National Assembly’s order.

Ayene, however, hailed the Lagos State government for sponsoring the DNA testes carried out on the bodies of the victims.

He also lampooned the management of Dana Air for playing politics with the plight of the relatives and alleged that the Aviation Ministry had not been pro-active in putting measures in place to forestall another incident.

The solemn ceremony was attended by members of the Lagos State Executive Council, members of the Diplomatic Corps, Senator Gbenga Ashafa, Senator Ganiyu Solomon, traditional rulers and the relatives of the ground victims of the crash.