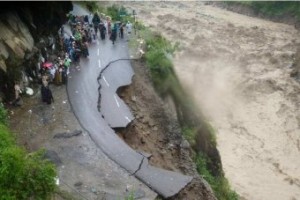 Bad weather has hampered efforts to evacuate thousands of people stranded in northern India where nearly 6,500 people are reported dead in monsoon flooding and landslides, Army officials have said.

Officials in the affected state of Uttarakhand on Sunday raised the death toll from 1,000 to 6,500.

Brigadier Uma Maheshwar said on Sunday that the army had suspended helicopter flights to rescue people stranded in the state after dense fog descended on the Himalayan region.

Instead, troops built makeshift bridges and people were being brought to safety by road.

Thousands of people were still stranded in remote mountain valleys in Uttarakhand, a popular pilgrimage destination, trapped in up to 100 towns and villages cut off since Sunday.

Home Minister Sushilkumar Shinde said that 34,000 people have been evacuated so far but 50,000 were still stranded in the region. 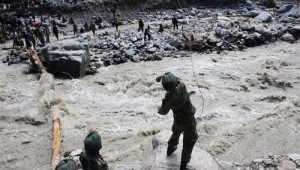 The temple escaped major damage, but debris covered the area around it and television images showed the bodies of pilgrims strewn around the area.

More than 2,000 vehicles carrying stranded Hindu pilgrims have moved out of the area since late on Thursday, he said.

Thirty-six air force helicopters had been ferrying rescue workers, doctors, equipment, food and medicine to Kedarnath, the town closest to many of those stranded, said Priya Joshi, an air force spokeswoman.