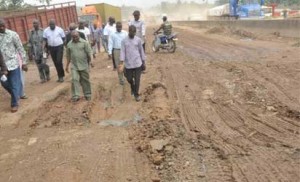 Members of the Delta and Akwa-Ibom Houses of Assembly, yesterday passed a resolution calling on President Goodluck Jonathan to ensure that he delivered the East-West road before the end of 2014 timeline as well as commencement of the construction of a railway line linking the South-South region to Lagos State and the Federal Capital Territory, Abuja.

Yesterday’s joint sitting of the two Houses of Assembly of both states was part of the activities marking the second session of the Fifth Assembly of the Delta Assembly.

The two Houses also commended the President for the declaration of state of emergency in some parts of the Northern States and urged him, “not to rest in his oars until he actualizes the provision of Section 14 (2) (b) of the Constitution of the Federal Republic of Nigeria 1999 as amended”.

Also the joint sitting passed a vote of confidence on the two governors of the respective states.

– That this joint sitting of the Delta State House of Assembly and the Akwa-Ibom State Hosue of Assembly urges His Excellency Dr. Goodluck Jonathan, President and Commander in Chief of the Armed Forces of the Federal Republic of Nigeria to direct the Federal Ministry of Transport, the Ministry of Niger Delta Affairs, the Niger Delta Development Commission NDDC and other relevant government agencies to immediately commence the construction of a railway line linking the South-South region to NDDC to ensure that work commences on the proposed coastal road project from Calabar to Lagos and to use his good offices to urge all oil exploration and exploitation companies operating in the South-South region including the NNPC and other stakeholders in the oil industry to as well partner with the above mentioned MDAs for the construction of the coastal road project which will serve as a catalyst for both regional integration and enhance economic activities in the South-South region.