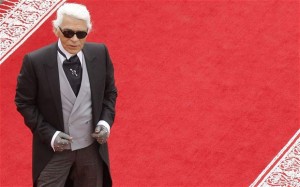 Designer Karl Lagerfeld has declared that he wants to marry his pet cat Choupette.

The eccentric creative director of Chanel said the one-year-old white Siamese cat was his most prized possession.

Choupette has its own staff, including three maids who are tasked with noting down everything the feline does while Largerfeld is away from their home in Paris so that he can check up on how his beloved pet is spending its time.

“There is no marriage, yet, for human beings and animals… I never thought that I would fall in love like this with a cat,” Lagerfeld told CNN’s Fashion Week: Backstage Pass.

When asked if the cat flies by private jet, Largerfeld said: “Yes, why not?”

Choupette is well known among fashion circles. As well as its own maids, the cat has 27,000 followers on Twitter. It has its own pillow and dines with Largefeld twice a day, eating food that has been specially prepared.

Choupette’s biography on the Twitter account @choupettesdiaryreads: “I am a famous beauty who refuses to eat on the floor & my maids pamper my every need. I am Choupette Largerfeld and I am a spoiled pussy.”