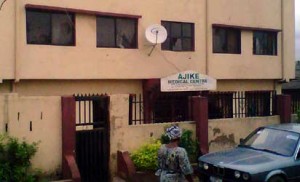 Dr. Babawale Joshua, who was accused of mutilating the corpse of a 13-month-old baby who died in his hospital, has denied his involvement.

According to the PPRO, the doctor will put up his defence on the matter.

“The matter has been transferred to the State CID. The doctor said when the boy died in his hospital, his corpse was taken away by the parents,” the PPRO said.

“He also said the corpse was later brought back to the hospital for the death certificate but the nurse they met did not know the baby’s body had been mutilated. He said the baby’s corpse was mutilated by his parents that took it away. That was his defence which he will put up tomorrow.”

The state Police Command on Sunday said it arrested four suspects including Dr. Joshua, the owner of Ajike Medical Centre at Sango Ota in Ogun State.

The PPRO in a statement said three others picked up were Oguntunde Opeyemi, Olaide Adeyanju and Temitope Muraina. They were arrested in connection with the case of mutilation of the corpse.

“The 13-month-old baby, Kingsley Ole, who was Mr. Obinna Ole’s son, had been on admission at the hospital for an ailment before he eventually gave up the ghost at 7.30pm on Saturday, in the said hospital.

“The story became astonishing when the father, Mr. Obinna Ole, went to claim the corpse of his late baby and discovered that the eyes, tongue, lips, ears, the private part, nails and the left hand veins had been removed.

“The Policemen attached to Ota Division, led by the DPO, CSP Gabriel Dibie, moved to the scene and arrested the suspects. The corpse of the late baby has been deposited at the Ifo General Hospital for autopsy.

“The Commissioner of Police, Ogun State, CP Ikemefuna Okoye, has ordered the SCID Eleweran to take over the case for thorough investigation and has assured the general public of doing the needful to bring the culprits to book,” the police said.

In a sharp reaction to Dr Oguntunde’s claim that the corpse was taken away and brought back to the hospital, father of the dead child, Mr Obinna Oleh said: “I did not take my baby’s corpse away. The doctor is lying. It is merely a ploy to deceive the police in their investigation.

“When I got to the hospital and discovered our son was dead, I wrapped him with a cloth, kept him on the bed, after which I left. How is it possible for me to take the corpse and return it?

“From our findings, we discovered that people have been dying in that hospital; pregnant women and babies in particular.”

He, however, expressed regrets over his decision to take his baby to the hospital. This, he explained, was as a result of the unbearable temperature the baby developed at about 4 a.m.

He said: “We decided to rush him to the hospital because it was the only one around and also not to take chances.”

He therefore called on the Police to carry out a post-mortem report on the baby to ascertain the cause of his death, alleging that his death could have been caused by the hospital. [Vanguard]