The Ogun State Police Command, Sunday, said it has arrested one Dr. Babawale Joshua who owned Ajike Medical Centre at 11, Adeyemi Street, Saka, Sango Ota, for suspected ritual activities and disrespect to the corpse of a 13-month-old baby who died in his hospital. 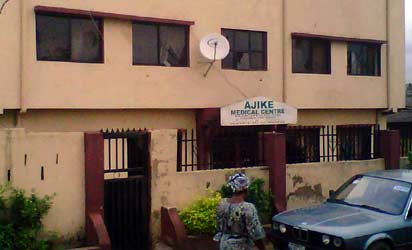 According the Police Public Relations Officer, PPRO, for the state, Mr Muyiwa Ogunjobi, the police discovered that the boy’s corpse was mutilated. He told Vanguard that  the eyes, tongue, two lips, two ears, private part, nails and the left hand and veins were cut off at the hospital.

In his account of what happened, the child’s father, identified as Obinna Oleh, a 35-year-old auto spare part dealer at Ladipo market, from Umunze village in AnambraState, said: “On Friday the 7th of June, my child took ill, my wife joined me to rush him to the hospital.

“The next day, being Saturday, I came to see them at the hospital in the morning before going to my shop while the child was actually getting better then.

“It was with this hope that I left for my shop thinking that at least before the end of the day, the child would have recovered fully.

“But in the afternoon, my wife called to inform me that the baby’s health had deteriorated, that I should rush home. When I got here, I met my child in a very critical condition.

“I asked if any medication had been administered on him and my wife told me that the doctor gave him an injection that afternoon and that the child’s stomach swelled after the injection.

“The baby was practically abandoned by the hospital management in this condition until around 8p.m when he finally died.

“As we attempted to carry the corpse, the nurse in charge said we had to clear our bills before we could take the body away. She also said she needed to call the Medical Director for the full amount we were to balance before they could release the corpse to us.

“Mind you, we were not owing them before the baby died. We made some  initial deposit prior to the baby’s admission and treatment. So when the nurse came up with the balance payment issue, I was not in the mood to argue that with them. I took my wife and we left, with the intention of returning yesterday morning to clear what ever bill there was, and take our child for burial.

“Also our pastor advised us to get a death certificate first before taking the corpse away for burial, so that we don’t encounter any problems with the police.

“We also needed to inform our kinsmen here about what happened. These were  the  reasons why we  left the body of our baby at the hospital till the following morning.

“But yesterday morning, I was having a meeting with my brothers on how to get a doctor’s report on my child’s death when the nurse called me to come over to the hospital, that it’s like they used a spiritual arrow to kill my child. I asked her what she meant by that. And at same time, followed her to the room where the body was.

“I was shocked to the bones to find my child’s body in a gory state. His ears were cut off, his private part, his tongue, his lips, and his eyes were plucked out. I am yet to recover from the shock of that sight.The police was informed and they came and took the body away.”

Meantime, when Vanguard visited the hospital, yesterday, it was under lock and key, having been shut by the police who confirmed the development.