The wave of domestic violence in all its forms sweeping across our country is disturbing and a source of serious concern to many people. Personal safety within family framework can no longer be taken for granted. Most victims of domestic violence are left to suffer in vain, sometimes killed, seriously injured or permanently disabled. 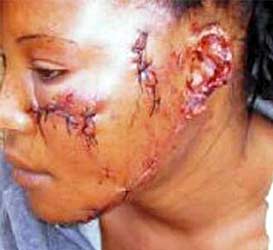 Ordinarily, domestic violence is that kind of violence that happens between family members in the home or during relationship between couple or would-be-couples.

Victim of battery Usually, response by neighbours, security agencies like police, even family members are not swift or sharp before any damage is done to either of the feuding parties, most likely the women (wives).

There is no symbolic support for the victim from the immediate environment or neighbourhood. But the world is changing, so also should be our feelings of security. It’s not enough to say the man or husband is callous, wicked who likes to turn the woman into a punching bag. It is also helpful to ask what is it that drove him to such brutality?

There was a recent case of a young man who battered his banker-wife to death barely few months after a high society marriage in Lagos. The sympathy of all civilised and decent people must go to the victims of these atrocities. However, these attacks could be reminder that others in several parts of this country having strained relationships with their spouses are not immuned from such acts of brutality and inhumanity.

Our people should learn to take active part in the protection of neigbours and not be complacent, claiming that they don;’t want to interfere in the private affairs of others

Barrister M.O. Aminah, said that domestic violence falls within civil offence under the law of tort when you cause bodily harm to your neighbour. She explained that battered women and children are people who have been violently attacked by their husbands or fathers.

“Assault is attacking somebody in a violent way. But battery is different from assault which is about beating one’s spouse. Whether battery or assault, a victim can seek redress in both criminal and civil actions. Criminal prosecution can be taken against people who violently attack their wives. Civil action can also be instituted for damages suffered as a result of battery. But one process must finish before starting the other,” she said.

On the causes of domestic violence: The causes are several. These include high temperament of the husband or the wife as the case may be, lack of understanding between the couple, lack of tolerance, incompatibility of the spouses, stress from work and even the daily chores of life.

Once these factors are present in the relationship and in the marriage, there is tendency for friction that can lead to violent attacks. Psychological reasons also can be attributed. When a spouse is suffering from dementia, his or her behaviour will not be stable. Quarrels can also cause fight in the home.

On the frequency of domestic violence: “It has become very rampant in the country. I know that cases are brought to the police stations almost daily. But the police always reluctant to treat such cases.

They will ask the couples to return home and settle their differences. Often police regards domestic violence cases as civil matters, and don’t want to be involved.

What about punishment for offenders?
This is quite dicey. Because the couples are seen as one. But where there are reasonable grounds for divorce when civil actions are brought by either the wife or husband, the court may consider such grounds and grant divorce.

Most victims of domestic violence preferred judicial separation at least to save themselves from further bodily harm, injury and even death

Others notwithstanding the danger inherent in continuing with the hostile and harmful marriage when it seemed to have completely broken down, would still want to save the union for the sake of their children.

Investigation showed that, to a large extent, our culture does not frown against wife battering and some wives have become used to violent attacks by their husbands

Many women have come to accept physical violence as the side effect of African marriage.

The more their husbands beat them, the more they become sexually aroused and submissive. It is only in western societies that women can walk our of marriage because of wife battery. In Africa including Nigeria where the culture of violence against women has thrived over the centuries, wives are obliged to hold to their marital vows to remain till death separates the couple. Infidelity is not tolerated and could lead to death of the woman who commits adultery especially of marriages contracted under native law and customs.