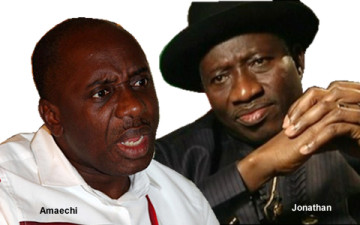 The Governor was stopped by a presidential bodyguard from greeting the President.

Amaechi who is the supposedly winner of the NGF election came in from the Rivers Governor’s lodge with his loyalist arrived when was already in progress.

Amaechi who got up and made his way towards where President Goodluck Jonathan was seated in company of Presidents Joyce Banda of Malawi and Ellen Johnson Sirleaf of Liberia, apparently to pay homage.

However, a presidential bodyguard blocked the governor from meeting the President. The Governor resisted for a while but had to return to his seat when it was glaring the bodyguard won’t allow him.

Not only was he blocked from seeing the President he was also not recognised. While Mr. Akpabio who he was seated with was introduced as chairman of the PDP Governors Forum..

The paper also reported an altercation between Amaechi and Akpabio. The duo reportedly accused each other of being undemocratic.

Governor Amaechi who said his presence with other governors had nothing to do with with the crisis in NGF.

According to him “Was NGF sick? I don’t know about factions. We are holding NGF meeting and we agreed that those of us who were there should honour the President and attend the dinner.

He stated that if 19 governors vote don’t count then we should be afraid of 2015. We must learn to be democratic.

Gov Amaechi said he is not aware that the party has any reason to suspend him but if he is been suspended by the PDP for that wining an election then its too bad.

On the way forward, that’s a question for Jang and those supporting him to answer. Those with me are in majority.”