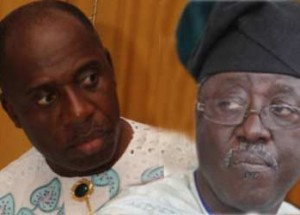 An Abuja High Court in Jabi, yesterday, witnessed a mild drama, as two Senior Advocates of Nigeria, clashed in the open court over who was duly briefed by the factional chairman of Nigeria Governors Forum, NGF, and governor of Plateau State, Jonah Jang, to represent him in the suit entered against him by Governor Babatunde Fashola of Lagos State.

Chief Tayo Oyetibo and Paul Erokoro, separately announced their appearances when the case was called-up in court, with each of them, insisting that he had the mandate of Governor Jang to file processes in opposition to the suit.

Both SANs maintained that having been duly briefed by Jang regarding the matter, they proceeded with filing separate preliminary objections before the court seeking the dismissal of Fashola’s suit.

An argument ensued between the two senior counsel over who should be allowed to represent Jang in the matter. Justice Peter Affen therefore decided to adjourn the case till July 3, to enable the SANs sort themselves out, as they could not reach a compromise.

Before adjourning the case, however, Justice Affen, who was visibly irked by the uncanny drama that played out, said he would not tolerate anyone bringing to his court confusion capable of exposing the judiciary to public ridicule.

Meanwhile, Fashola’s counsel, Professor Yemi Osibanjo, SAN, who appeared alongside Lagos-based human rights activist, Mr Femi Falana, SAN, prayed the court to go ahead and dismiss Jang’s objection, despite who between the contending lawyers filed it.

Osibanjo who was appalled by the idea of granting a stand-down in the matter to allow Governor Jang sort out the confusion registered hi opposition.

“We do not need a stand down, as there are two counsel for a party, it is an abuse of court process. My Lord, this was the same confusion they brought to the Nigeria Governors Forum, now their plan is to bring the same confusion to this court,” he said.

Justice Affen knew he had to contain the growing tension in court and he did by enjoining the lawyers to act with caution, as he noted that the judiciary was in the spotlight again. He urged lawyers not to do anything that would erode the credibility of the judiciary.

“Let us not toe the line of the Nigeria Governors Forum. We are here to resolve their differences and not to add to it,” Affen said.

Consequently, he held that in view of the conflict in representation, the best thing was to adjourn the case.

Jang had in one of his counter-affidavits filed by Oyetibo, SAN, urged the court to strike out Fashola’s suit against him for being frivolous. It was his argument that the Lagos State governor was bereft of the legal right to seek an order restraining him from parading himself as chairman of the NGF.

He also described the NGF dispute as “non-justiceable as it relates to a mere dispute as to political dignity”, maintaining that the fact that Fashola never contested the NGF chairmanship election, stripped him of the legal right to institute or sustain the action.

He argued that Governor Rotimi Amaechi of Rivers State who Fashola claimed won the election could have been in the right position to complain to the court, but he never did, nor was he named or joined as a party to the suit.

“Traditionally, the NGF does not hold elections to produce a chairman. It is the practice that the chairman of the Forum is appointed by consensus of the members. Where a consensus cannot be reached, the candidate supported by a simple majority would become the chairman.

“In pursuance of that fact above, Governor Amaechi was informed that nineteen of the thirty-six Governors of the states of the Federation have indicated in writing their decision to support Governor Jonah Jang as Chairman of the NGF,” Jang said.