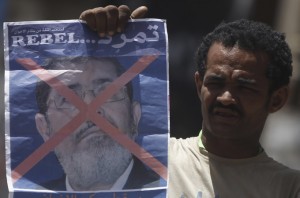 Egypt’s future may depend on what happens tomorrow, as the opposition-backed protest holds tomorrow amid tension between protesters and the Muslim Brotherhood, with three people dead following a night of clashes.

Rival demonstrators pitched tents and began sit-ins on Saturday to prepare for Sunday’s rallies, a year to the day of Morsi’s election. The demonstrations were planned after opponents called for Morsi’s resignation and snap elections, which prompted pre-emptive demonstrations on Friday by the Muslim Brotherhood and its allies.

The military has not directly intervened despite fatal attacks on Friday. The offices of the Freedom and Justice Party, the political arm of the Muslim Brotherhood from which Morsi hails, were set on fire in Alexandria and at Aga in Daqahliya. Its offices were stormed in Beheira.

Two people were killed in Alexandria, including an American student who was stabbed to death while taking pictures of the clashes, and an Egyptian journalist was killed in Suez Canal city.

Morsi’s opponents, a collection of leftists, liberals, Christians and also deeply religious Muslims, accuse him of hijacking the revolution and concentrating power in the hands of Islamist groups.

Morsi supporters spent the night outside the Rabaa Al-Adawiya mosque in Cairo’s Nasr City neighbourhood, where tens of thousands gathered on Friday to defend the legitimacy of Egypt’s first freely elected president.

“It’s not just about Morsi, it’s about legitimacy and the state. We can’t go backwards,” said protester Kamal Ahmed Kamel.

Others called on the opposition to invest their energy in the political process.

“If it is that big tomorrow, why can’t they use the ballot box and participate in parliamentary elections and get rid of Morsi that way?” Kamel asked.

In Tahrir Square, the epicentre of the 2011 revolt that toppled Hosni Mubarak, opponents also camped out and erected a large stage in preparation for what they call a “second revolution”.

Some activists say they want Egypt governed by a presidential council and a national unity government.

“The Islamists have been in power for a year and they proved they failed at running the country,” said activist Adel al-Amir.

“We will not allow a coup against the president,” senior Brotherhood leader Mohamed al-Beltagui told a mass rally in Cairo.

The opposition National Salvation Front coalition has spurned Morsi’s offer and renewed its demand for an election.

Sunday’s protests have been called by Tamarod – Arabic for “rebellion” – a grassroots movement which says it now has 22 million signatures on a petition demanding Morsi’s resignation and a snap election.