Popular Nollywood star Emeka Ike is in serious scandal as we learnt, he may go to jail if he fails to rectified the issue as soon as possible.

The controversial former AGN president, we learnt is involved in a bounced cheque scandal that we learnt, may take a jury to get him out. 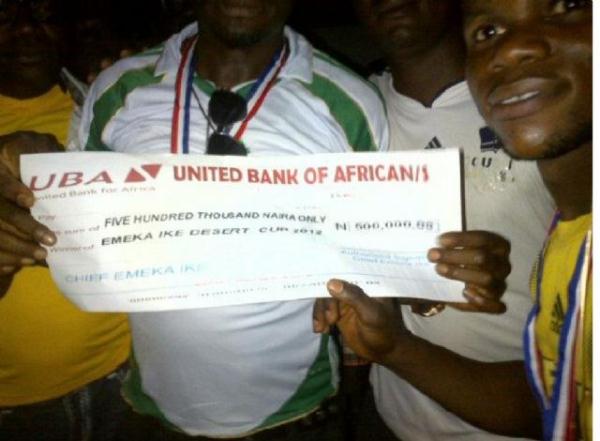 As the story goes, the actor who received a chieftaincy title in Egbonike, Anambra State and was recently made a Sports Ambassador for the newly launch project ‘RHYTHM and PLAY’ is in serious scandal, but this time, not in Nollywood nor power struggle, but a scam act that involves footballers.

Emeka Ike decided to give back to the community where he grew up, in Ogudu Ori-Oke Ojota Lagos state, by hosting a football tournament. The tournament was called Desert Football Tournament and was organized by Unity Football Association (UFA)

Emeka said the main reason why he decided to host the tournament was to help young talented footballers discover their talents, and thereby reduce crime rate in Nigeria. He also revealed that Tottenham and Togolese striker, Emmanuel Adebayo, has agreed to assist some stars to be identified at the football tournament, adding that some major clubs in Europe are also sending scouts to the tournament.

On the posters in the streets of Lagos, it was included that Kanu Nwankwo and the Minister of Youth & Sport, Mallam Bolaji Abdullahi will be their special guests of honor.

Each team were asked to pay the sum of #3000 for registration and 16 teams participated.

Aside the popular musician, Daddy Showkey, who came to rack up the excitement of the tournament with his presence, no other public figure was present. Six months after the tournament we gathered that, none of the winning team has redeemed their winning as you read this as Emeka was alleged to have totally ignored frequent calls or text messages sent to him after he issued a bank cheque to the guys.