Cross over actress, Eniola Badmus is not finding it easy with critics who often lampoon her on social media about her plus size. Recently, she criticised those who made negative comments about her photo shoot and that has kind of generated a lot of hits. 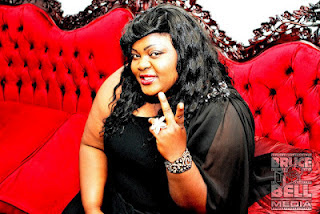 She was asked why she had to go that hard on her fans over mere comments about her big shape and she said, “People tend to underrate just to make you feel somehow or to intimidate you. That’s why I say, I don’t see intimidation. If anyone should come out and say ‘Eniola is big! She is that!’ For goodness sake, I like it like that. I’m okay.

“Besides, my body shape is giving me money and I’m good. I’m living well. I’m healthy. I’m sure I’m healthier than some slim people. All of us can’t be slim. People should stop this body-shaming pinging. It’s not nice.”

The Gbogbo Bigz Girlz as she is fondly referred to, a name she got from the role she played in Funke Akindele’s movie, Jenifa, fired at those who make nasty comment on social media:

“Even if you want to advise someone that it’s not nice, there is a way you can say it not by insulting people because you feel you can just write or talk anyhow on social media. No! Anybody that insults me on social media, I will insult back. Yes, because it doesn’t make one feel good.

“In foreign countries, intimidation causes some people to commit suicide. When you are being intimidated, that’s when depression comes up. After depression, you go and die. Me, die because of what? No oh! This life is too sweet to die, because of words of some people. I’m okay.

“If anyone doesn’t like me, they should keep a distance. The people that like me will forever be around me. I remember that I wrote, why use panadol for my headache? Every blog carried it that I said I know my stature is a big problem to some. But it’s the truth.

“Most of the fat babes, the plus size people who watch me want to emulate me because I’m a celebrity. Whatever she does let’s do it. You get it? I know I’m a role model to some people.”