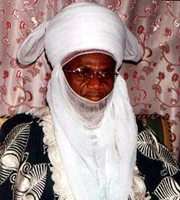 Former Kwara and Kogi States’ Governors, Senator Bukola Saraki and Ibrahim Idris, along with seven others, have been conferred with traditional titles by Estu Nupe, Alhaji Yahaya Abubakar.

Conferring the titles on the personalities yesterday, Estu Nupe said it was in recognition of their hard work and urged them to remain steadfast in their commitment to peace and progress of the society.

Earlier in his speech, the governor of Niger state, Dr Mu’azu Babangida Aliyu called for continued support and respect for traditional institutions in the country, saying it is only by according them their due respect that the rich culture of the society could be preserved.

Represented by his deputy, Ahmed Musa Ibeto, Aliyu said, “Our traditional leaders symbolize those elements that define us as a people and we must hold them in high esteem at all times, to encourage other people to respect us.”

Speaking on behalf of the new title holders, Senator Saraki hailed the Estu Nupe as one traditional ruler who worked tirelessly for the unity of the country, adding that all the recipients would be good ambassador of Nupe land.

Saraki, Idris and Minister of Power, Zainab Kuchi, who were prominent among the recipients, were conferred the titles of Turakin Raya Kasan Nupe, Sardauna Raya Kasar Nupe and Soniyan Alkalai Nupe respectively.