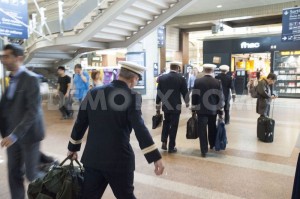 A plan to open the European Union’s air traffic control system to private enterprise has led to strikes and job actions by controllers.

The strikes that began in France on Tuesday are expected to spread to 10 other European nations on Wednesday.

At the centre of the dispute is the idea of a single European sky consolidating the continent’s air traffic control systems under a sole authority, turning its many scattered air traffic zones into a few regional blocs, opening up bidding on services such as weather forecasting and navigation, and easing what European officials say is a looming capacity crunch.

About 27,000 flights a day now cross European airspace, for a total of over nine million a year and most are flying under air traffic management systems that were designed in the 1950s, the European Commission said.

Air traffic control workers, however, do not necessarily want to adapt to new proposals put forward by the EC.

They say they fear threats to passenger safety and to their jobs and claim that the EU is yielding to industry pressure to cut costs.

“This is a dispute between European technocrats who know nothing about air traffic control and highly trained specialists,” said Olivier Joffrin, a union leader in Paris.

Air traffic controllers in France began a series of strikes on Tuesday, forcing the country’s main airports to cut their flight timetables in half just as the busy tourist season was beginning. About 1,800 flights were cancelled.

Workers elsewhere in Europe are expected to join on Wednesday to varying degrees, from working strictly by the book, to picketing and distributing leaflets, according to the European Transport Workers Federation. [Al Jazeera]