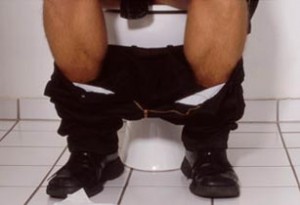 The local chapter of the Left Party, a socialist and feminist political party, in Sormland County Council, Sweden, is pushing to make standing while peeing illegal for men using the county council’s public restrooms.

Party officials are pushing to make public restrooms in the county council “sitting only.”

Supporters of the proposal say sitting while urinating is more hygienic and promotes sanitary restroom habit for male users.

It will help to eliminate the problem of puddles on the floor and spray stains on toilet seats.

They also argue that urinating while sitting will help to promote male health because it allows men to empty their bladder more effectively.

Sitting while urinating according to advocates will reduce prostate problems among men.

As a compromise, the party has proposed that some toilets could, in the interim, be designated exclusively for men who must remain standing while peeing.

The Left Party’s Viggo Hansen, who made the proposal, said that ultimately he wants office toilets in the council to be genderless and would thus like to see only “sit-down” toilets in county council offices.

He said that the move should not be seen as meddling in the bathroom habits of people.

He said: “That’s not what we’re doing. We want to give men the option of going into a clean toilet.” But proposals across Europe to enforce “sitting only” regulation in public toilets have been criticized.

Dr. John Gamel of Louisville University noted that the push to enact legislation banning men from standing while peeing in restrooms is spreading in Europe with feminists pushing similar legislation in Germany, France and Holland.

“The liberated women of France and Germany and Holland have vowed to put their men down – on the toilet. They carry placards showing a huge red X scrawled across a man standing to urinate.

Gamel argues that legislation cannot force men to adopt more supposedly sanitary habits while peeing. He told The Huffington Post that the spray and spatter during “shake off” will not be prevented because “no man will want to shake off” while sitting on the toilet to avoid sticking the hand inside the toilet.

Gamel writes: “…most of the stray “sprinkles” that so enrage European women occur not during the act of urination itself, but immediately afterward, during a ritual men learn as part of their potty training. The various maneuvers required to discharge the urine remaining in the urethra.

A man who tucks away his penis without performing these maneuvers will dribble half an ounce of urine into his underwear, causing an embarrassing stain in the crotch of his trousers, or an even more embarrassing streak down his trouser leg.

To avoid this debacle, every sentient male, after every urination, carefully squeezes or “milks” his member to assure that no stray drops remain within the urethra. “Unfortunately, some men pursue this goal with excessive vigor, indulging in what can only be described as “shaking off the last drop.”

It is precisely these movements – and not the free-falling stream itself – that deposit most of the unwanted urine on lavatory floors throughout the world.”

“As a result, forcing men to sit while emptying their bladders will serve little purpose, since no man wants to shake himself off while remaining seated on the toilet.”