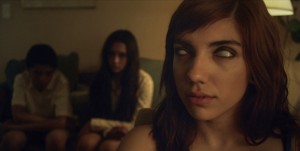 According to the report, around 20 students aged between 12 and 16 started acting strangely—screaming, crying, fainting and convulsing—prompting claims that they were possessed by evil spirits.

A Grade 8 teacher at the public school, Julie Esparagoza,  said the incident started shortly after 9 a.m. and initially involved two girls from her section.

Esparagoza said that she and her students were in a classroom when one of the girls suddenly stood up and began acting strangely while the other lost consciousness.

The teacher added that the girl who stood up had to be restrained at one point since it looked like she was going to attack her unconscious classmate.

The woman immediately brought the two girls to separate classrooms where their behavior gradually returned to normal.

Esparagoza, however, said she later observed the same behavior among her other students who had stepped out of the classroom for their break. According to her, she saw five girls and a boy “lying on the floor and shaking while others were crying frantically.”

A male student who refused to be named said he saw one girl “convulsing” on the ground near the stage in the middle of the playground while another was “in tears.” “I helped bring them to the principal’s office,” he said.

They were not the only students who were affected. Esparagoza said the same behavior was observed in other Grade 8 students from five different sections. She added that she tried looking for a priest to help the affected students but the staff of two churches she called up told her that the priest was not available.

A pastor from the nearby Born-Again Jesus First Christian Ministries said he rushed to the school when he learned of the incident from a church member.

“The students were shouting: ‘I don’t want to! I don’t want to!’, ‘Princess!’” Pastor Boyet Sion said. But no one knew who Princess was. He said he prayed for the students and they calmed down a few minutes later.

According to Editha Septimo, the officer in charge of the high school section, some of the affected students were taken to the principal’s office while the others were brought to a classroom where a doctor attended to them.

Septimo said she had no choice but to suspend classes in the Grade 8 level at 10 a.m. after parents started rushing to the school to get their children out of fear that they would also be “possessed.” “The parents were very frantic, some were hurling insults at us,” she added.

However, as soon as the unaffected Grade 8 students were allowed to go home, at least four Grade 7 students began exhibiting the same behavior, Esparagoza said. This prompted Nerissa Lozaria, assistant schools division superintendent, to suspend classes in the entire school.

Several of the “possessed” students were allowed to go home after they calmed down while the others were taken to a nearby church where they were blessed, Esparagoza said.

A worker at the church who refused to be named said around 10 students were brought there for exorcism but they later left, some of them to attend Mass at Quiapo Church.

Those who witnessed the incident, meanwhile, were divided about what happened. Septimo was skeptical and called the incident a case of “mass hysteria” caused by students who just wanted attention.

She cited one “possessed” student whose behavior immediately returned to normal after she was told she would be injected with something to calm her down. Septimo said that this was the first such incident at the school.

Sion, for his part, said the incident was clearly a case of “evil spirits possessing the students.” According to him, he heard reports that some of the affected pupils had earlier conducted a seance (spirit of the glass) at a cemetery near the school.

“They might have invited the spirits to possess them,” he said. His theory was supported by a church worker who said that two children were taken to the church hours before the incident at the school.

The complaint of those who brought the two children in: They seemed to be possessed by evil spirits.

The church worker said that several balete trees were cut down at the school only recently to give way to the construction of a covered court. This may have angered some spirits, the worker added.

After calming down, four of the students told the teachers that they saw images of a mother and a child. They also saw an image of a man in black clothes.

Due to the confusion school officials also decided to suspend classes for the whole day.