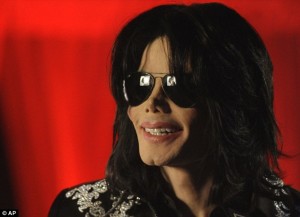 These are the shocking images which further detail Michael Jackson’s tragic spiral into prescription pill dependency, revealed as his family pursue a lawsuit against his concert promoters. The evidence pictures, released by the Los Angeles Police Department this week, show numerous pill bottles, oxygen tanks and medical supplies littered around the superstar’s bedroom at the time of his death on June 25, 2009.

One image, which was not among the dozens of pictures shown as part of the Conrad Murray manslaughter trial, reveals a metal stand with a hanging bag of intravenous fluids attached. In the background are numerous portraits of unidentified babies along with a small picture of Charlie Chaplin. Several canisters of what appears to be oxygen stand next to a wooden dresser topped with gilded mirror.

Michael Jackson’s mother Katherine is suing AEG Live, claiming it failed to properly investigate her son’s personal doctor, Conrad Murray, and missed warning signs about his failing health. Murray was convicted of involuntary manslaughter in 2011 after giving Jackson a lethal dose of the anesthetic propofol.

In the new photo collection, prescription pill bottles are seen lined up on a nightstand alongside over-the-counter products and a bottle of water while empty containers roll around on the floor. Along with propofol, the names of drugs Diazepam and Lidocaine are marked on some bottles’ labels.

In one telling image, which appears to have been taken in a car, there is a list of nearby 24-hour pharmacies and the phone numbers. Conrad Murray’s medical bag is also indicated in one picture, according to RadarOnline, stashed high in a closet in the superstar’s dressing room. There are also similar images from Murray’s trial including shots of Jackson’s iconic embroidered jackets hanging in a closet and stacks of movies on a nightstand.

The shocking new set of images came as jurors in the Jackson case were shown an email on Monday in which the top executive at AEG Live LLC expressed grave concerns about treatments Jackson was receiving from his longtime dermatologist. The email sent by AEG Live CEO Randy Phillips said the company was ‘scared to death’ of drug injections given to Jackson. Phillips told jurors that the email was a response to a $48,000 bill that Jackson’s manager received for the treatments by Dr Arnold Klein. ‘He scares us to death because he is shooting him up with something,’ Phillips wrote.

The email was sent to Jackson’s business manager Michael Kane after a meeting was held at the singer’s house to address his health and missed rehearsals. The treatments included numerous shots of cosmetic drugs such as Restalyne and botox, as well as other unidentified intramuscular shots, Phillips said, citing the bill. Klein’s attorney has defended the doctor’s treatment of Jackson.

AEG denies any wrongdoing, and Phillips and other executives have testified during the trial that it would have been inappropriate to ask about or intervene in Jackson’s medical care. Phillips was told by a judge to answer questions posed by a lawyer for Katherine Jackson without arguing and that his demeanor might be hurting his case.

Jurors were sent from the courtroom before Superior Court Judge Yvette Palazuelos addressed Phillips, who has sparred with attorney Brian Panish throughout his testimony. The lawyers have been repeatedly warned by the judge about the behavior. ‘Arguing with the lawyers isn’t really going to help,’ Palazuelos told Phillips. ‘It’s not going to help your case. It’s not going to help anybody.’ Phillips said Panish was repeatedly asking him questions about the same subject. ‘I’m just trying not to say the wrong thing,’ Phillips said. The admonition by the judge came after Panish asked Phillips about characterizations of Murray that Phillips made in an email sent five days before the singer died.

Phillips acknowledged that some of the statements – including that AEG Live had checked out Murray and that the former cardiologist didn’t need the job – turned out not to be true. When Panish asked if Phillips had acknowledged that some of his statements to the director of Jackson’s This Is It shows weren’t true, the executive said: ‘Honestly, only to stop you from badgering me, yes.’ Palazuelos briefly stopped the testimony and issued the warning. Jessica Stebbins Bina, a defense attorney for AEG Live, said some of Panish’s questions had been argumentative. The judge disagreed.