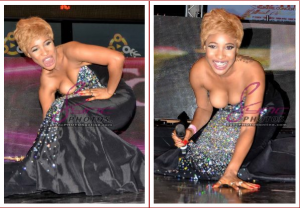 A mob of fans and critics bombarded her Twitter handle and tweeted comments about the circumstances which made her fall during the concert. A cross section of those who tweeted at her said she must have been drunk while some advised her to cultivate the habit of putting on wears that would make her feel comfortable whenever she goes for such shows.

One of her fans with the name, Blessing Banna, describes the fall as a big disgrace. She notes that the incident that made her breasts come out to the open is unfortunate.

She tweets, “I have told you several times never to take too much of alcohol whenever you wanna perform on stage! Easy girl life na jeje. This  babe no dey learn at all! Which kind disgrace be this!”

Another of the actress’ fans, Lina Bella, asks her to drag the organisers of the show to court and get damages for inviting her to anchor a show on a slippery floor.

“You owe nobody no apology. As a matter of fact, you should sue the organisers for staging the concert on a slippery floor. Na abroad you dey and everything na court,’’ Bella advises.

Some other Nigerians who were amazed at the news of Tonto Dikeh’s fall say they are going to use her picture showing her fall at the London concert as their avater on Twitter. One Sage Kristen tweets, “In fact,  I must use her picture as my new avi.’’

On his part, @DaBishop says Tonto Dikeh deserves an award as one controversial Nigerian who always finds herself breaking into trending topics on Twitter.

“I think Twitter should give @TONTOLET a big award as the most trending individual in Nigeria every two months. She is the real meaning of celeb.’’

But one Orekelewa disagrees with  @DaBishop,  saying Nigerians who cultivate the habit of making a mountain out of a mole hill are the ones making it seem as if she is famous.

“’You are all just making @TONTOLET even more famous with this falling crap. She is not the first to fall on stage and won’t be the last.’’

Meanwhile, some other people say if Tonto Dikeh continues to adore herself in such outfits she wore at the London concert, she should expect more stage falls.

@theurbanboy says, “You (Tonto Dikeh) looked very hot last night, baby, and when you fell, you were hotter. You need to be falling more often with dresses like that.’’

Rita Egwu, however, appears sympathetic when she says, “I think it was the skirt that was tight or maybe the shoes. High shoes do that sometimes even if you are walking.’’

Tonto Dikeh really has more associates who are sympathetic to her situation, with many of them giving her words of encouragement.

Artus Frank, in a tweet, says, “I heard you fell on stage. Don’t let it get to you, a bad day isn’t a bad life’, while ‘Priti Priti says,  “Sorry about that, dear. The slippery tiles and the shoes!  It happens often to celebs! Lady Gaga fell the other day on stage, stay strong! Love you.’’

The controversial actress, who was once advised by fans and critics to forget music and concentrate on acting, has, however, taken steps to turn the incident to a good public relations strategy for her social profile.

She has responded to a couple of tweets, while she has also denied in a tweet that she was drunk.

“So, I had a big fall on stage. But no I wasn’t high. The long dress and the slippery floor don’t go,’’ she states in a tweet.

Speaking about the discussion and debate the incident ignited on various social media platforms, she says she is surprised that she broke into trending topics while Iyanya, whose show he went to anchor, has not got such a new media frenzy.

She says, “This is wrong. I’m trending and Iyanya isn’t? I enjoyed his show. He made me dance all night. The show was mad.”